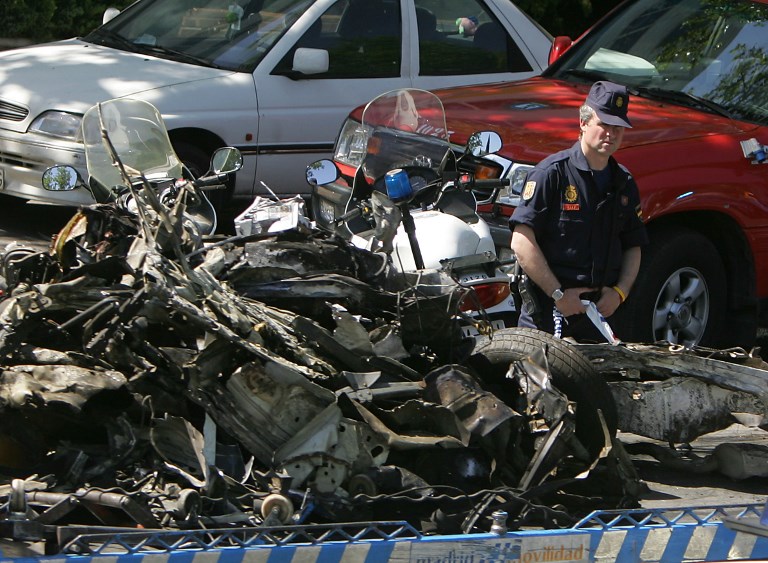 Wreckage after a car bomb in San Blas, Madrid, May 2005. Archive photo: AFP

The Basque separatist group ETA apologised Friday for the "pain" and "harm" it caused during its decades-long campaign of violence, and appealed to its victims for forgiveness.

"We have caused a lot of pain, and irreparable harm. We want to show our respect to the dead, to the wounded and to the victims of the actions of ETA... We sincerely regret it," it said in a statement released in the Basque newspaper Gara.

The statement came just days before ETA is expected to announce its dissolution.

"We know that, forced by the necessities of all types of armed struggle, our actions have harmed citizens who were not responsible. We have also caused serious wrongs which are irreparable. We ask forgiveness to those people and their families", it said.

ETA waged a nearly four-decade campaign of bombings and shootings to establish an independent Basque state in northern Spain and southern France.

At least 829 people were killed before the group announced a permanent ceasefire in 2011.

In its statement to Gara, its traditional means of communication, ETA said it was not the alone in being responsible for the violence in the Basque Country.

"Suffering existed before the birth of ETA and continued after it ceased its armed struggle," it said.

The group has been severely weakened in recent years after police arrested hundreds of its members, including its leaders, and seized several of its weapons stashes.

Spain's 2.2-million-strong Basque region is now gearing up for the dissolution of the group created in 1959 at the height of Francisco Franco's dictatorship.

On Thursday, an international mediator, Alberto Spektorowski, said that "failing a last-minute surprise" ETA would announce its dissolution on May 5 or 6.

"The declaration that ETA no longer exists will be very clear," the Israeli academic, a member of the International Contact Group, told Basque radio EITB.

"I cannot say what words they will use but no one will be left in any doubt," he said, adding that the announcement would be made across the border, in the French Basque region.