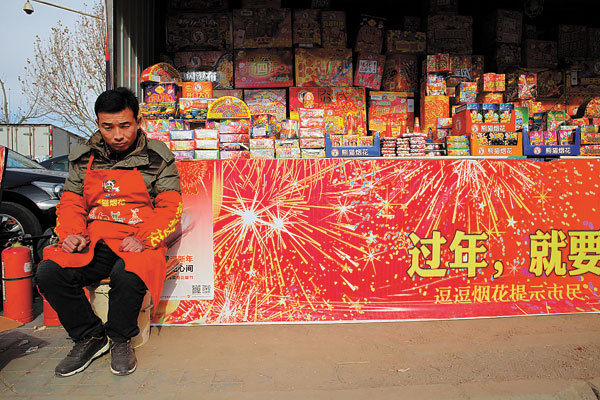 A salesman waits for customers at a fireworks retail outlet in Beijing’s Chaoyang district on Saturday. WANG JING / CHINA DAILY

More than 13,000 boxes of illegal fireworks have been confiscated in Beijing in the past four months, police said Monday.

More than 100 suspects have been detained in connection to the cases.

One of the suspects, surnamed Liu, reportedly sold fireworks via his WeChat account. Police found more than 300 boxes of illegal fireworks in his and his relatives' houses last month.

Liu said that he had purchased the fireworks from another suspect surnamed Wang and sold the items online.

Police said they will reward people who provide information that helps with the campaign against the illegal sales of fireworks.

In December, Beijing authorities passed a regulation that bans fireworks within the Fifth Ring Road of the city in light of heavy air pollution and casualties caused by fireworks in recent years.

Chinese often celebrate with fireworks the Lunar New Year, which falls on Feb. 16 this year.

According to an official with the legal affairs office of the Beijing municipal government, dozens of people were injured or killed in fireworks-triggered accidents during the Chinese Lunar New Year period between 2015 and 2017.

The number of heavy air pollution days during the seven-day festival reached two to four days each year during the past five years, the official said.