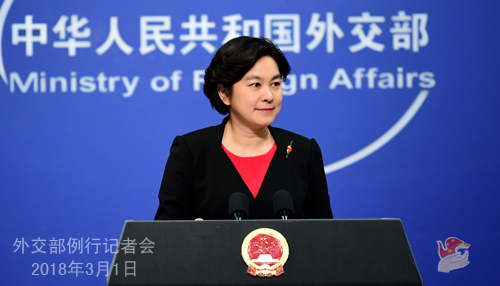 Chinese foreign ministry voiced strong concerns over a US travel bill to Taiwan on Thursday, saying it violates the one-China principle.

“China is strongly dissatisfied with and firmly opposed to that, and has lodged stern representations to the US.”

Hua also urges the US to abide by one-China principle, which is considered the political basis for China-US relations.

“We urge the US to honor its pledges made to China on the Taiwan question, stop advancing the bill, properly deal with Taiwan-related issues, and ensure steady development of China-US and the cross-Straits relations,” she added.

The US Senate passed the Taiwan travel bill on Wednesday. China has warned it could threaten stability in the Taiwan Straits.

The US House of Representatives passed a similar bill in January.

The legislation of the bill only needs a signature of US President Donald Trump to become law.

The bill says it should be US policy to allow officials at all levels to travel to Taiwan to meet their Taiwanese counterparts, permit high-level Taiwanese officials to enter the US “under respectful conditions.”