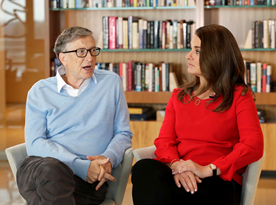 Washington (People’s Daily) - Bill and Melinda Gates shared their annual letter for 2018, with the theme “The 10 toughest questions we get asked,” on February 13.  The 2018 letter marks the tenth one that they’ve written.

Together, they responded to 10 tough questions they’ve received over the years from nonprofit partners, government leaders, the general public - supporters and critics alike.

The questions touched on a variety of topics ranging from education and climate change to politics and partnerships. That includes queries into the $40 billion foundation’s impact on US education, whether they’re sharing their values with other cultures through global giving, and if it’s fair that they have so much influence due to their wealth.

Throughout the letter, they address with some humility the evolution of their philanthropic strategies, and Melinda repeatedly raises the importance of women’s empowerment.

They begin by noting that while the majority of headlines focus on the negative, they see as a world that’s getting better, citing the number of children who die every year has dropped 50 percent since 1990, while extreme poverty has declined by nearly half in 20 years.

They said being an optimist isn’t about knowing that life used to be worse. It’s about knowing how life can get better.In the letter, they said, “Although we see a lot of disease and poverty in our work—and many other big problems that need to be solved—we also see the best of humanity.”

Bill Gates highly praised the Chinese government's efforts on poverty reduction and said, “In terms of China’s poverty work, China did a very strong job on reducing poverty, way before anyone else was engaged in that. It's fairly recent that we've joined in dialogue to help with this ambitious goal of erasing extreme poverty.”

He also said, “We do think in terms of what we understand about health issues and perhaps even mobile money type payments and that we can be a partner with the Chinese government in that effort.

“I know that for China, the goal's not just the extreme poverty but even more broadly, the equity agenda, so thinking about how the government takes all of those things -  health, shelter, food -  brings them together, maybe does some model work that other governments could learn from. I'm fascinated that there's a big opportunity there because you know China does have a strong commitment to equity sort of as a founding principle,” he added.

As the Trump administration has cut US foreign aid, threatening to make further cuts, Bill said he believes in generous foreign aid, because although it’s a very small part of the government’s budget, it really has had a huge impact.

The good news is that US foreign aid, which adds up to about $30 billion a year, has not been cut even though a proposal was submitted, Congress passed on it.

The Gates Foundation reports spending of about $4.5 billion a year, consisting of $500 million in the US and primarily on educational programs. Meanwhile, $4 billion goes to global health, agriculture, and other efforts in helping developing countries.