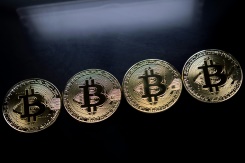 The eye-watering surge in Bitcoin has come with several warnings that a bubble is about to burst. (Photo: Justin TALLIS/ AFP)

The precipitous drop came after a series of warnings by analysts and governments about a bubble that could burst at any moment as investors, many inexperienced, piled into the unit hoping to enjoy some of the eye-watering gains.

That was a decline of more than 30 percent from its record high of $19,500 Monday, according to data compiled by Bloomberg. After starting the year near $1,000, the digital currency soared to $10,000 in late November, and nearly doubled that just a couple weeks later.

The sell-off has bled through to other cryptocurrencies such as dash, litecoin and ripple, all of which were sent plunging.

Stephen Innes, head of trading for Asia Pacific at OANDA, said investors are having a "reality check."

"At the heart of the matter was a frenzied demand for coins with limited supply has now led to unsophisticated investors holding the bag at the top."

One of the largest bitcoin trading platforms, Coinbase, halted trading for more than two hours Friday, citing "today's high traffic." But the service was restored around 1845 GMT.

Some analysts attributed the plunge to profit taking, while others said the drop was just another sign of the inherent volatility in the asset.

"There's no catalyst in particular for the drop," said Alexandre Baradez, analyst for IG France. "But bitcoin is 20 times more volatile than trading the euro to the dollar."

At its height, bitcoin had soared almost 30-fold since the start of the year, helped in part by its debut on mainstream markets as two major US exchanges began trading bitcoin futures.

And the mania that has swept the bitcoin universe saw a New York beverage company this week announce it was shifting into cryptocurrency-related investments.

Long Island Iced Tea Corp of Farmingdale, New York -- which says it currently produces the soft drink with a proprietary recipe -- said on Thursday it was changing its name to "Long Blockchain Corp" and would explore investments in the technology underlying cryptocurrencies.

Shares in the firm rose 180 percent on the tech-rich Nasdaq following the news.

And Friday, Belarus President Alexander Lukashenko signed a decree legalizing bitcoin and other cryptocurrencies and permitting "smart contracts" that run on the blockchain technology.

But bitcoin began looking shaky on Wednesday when it took a 15-percent hit following news South Korean exchange Youbit had been hacked, leading the firm to say it will close and start bankruptcy proceedings. South Korea and Japan are home to some of the largest number of traders in the currency.

The Youbit development came a day after US authorities suspended trading in a popular bitcoin-related stock, citing concerns about market manipulation.

The Crypto Company's share price had risen 1,700 percent between the end of September and Monday evening before the Securities Exchange Commission intervened to halt trades until January 4.

There have been numerous warnings about a possible blowout in the market.

Bank of Japan Governor Haruhiko Kuroda said on Thursday that the price surge of the virtual currency was "abnormal," while Singapore's central bank advised investors to "act with extreme caution".

European Central Bank officials also have expressed concern about the relentless rise in the value of bitcoin and the potential risk accompanying the trend.

US Federal Reserve Chair Janet Yellen has said bitcoin is not money and called on banks to be certain their digital currency transactions adhere to anti-money laundering statutes.