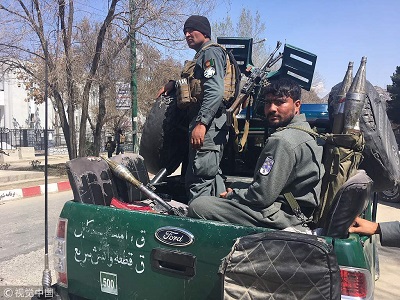 KABUL, March 21 (Xinhua) -- Up to 26 people were killed and 18 others wounded after a suicide bomber blew himself up close to the Kabul University on Wednesday, an official said on the condition of anonymity.  According to the official, "a terrorist tied explosive device in his body obviously was going to target Sakhi Shrine where thousands of people were gathered to celebrate Nawroz or the solar new year of 1397," but due to tight security, he could not reach there and detonated his device close to the Kabul University.According to the official, 26 passersby were killed and 18 others injured.However, police believe that eight people were killed and nearly two dozen others wounded.Police have cordoned off the area following the blast.Since Nawroz is a public holiday in Afghanistan, no official was available to provide details of the attack.Both the Taliban and the hardline Islamic State group which have been fighting against the Afghan government are against Nawroz celebration in the country.The Interior Ministry has yet to make comment on the incident.