HEADLINE Boko Haram has abducted over 1,000 children in Nigeria since 2013: UNICEF

Boko Haram has abducted over 1,000 children in Nigeria since 2013: UNICEF

As Nigeria prepares to mark the fourth anniversary of the Chibok kidnapping, UNICEF reported on Friday that over 1,000 children have been abducted by jihadists since 2013.

"Since 2013, more than 1,000 children have been abducted by Boko Haram in northeastern Nigeria, including 276 girls taken from their secondary school in the town of Chibok in 2014," said UNICEF in a statement.

"These repeated attacks against children in schools are unconscionable," Mohamed Malick Fall, a UNICEF representative in Nigeria.

Schools, particularly those with a secular curriculum, have been targeted by Boko Haram, whose name roughly translates from Hausa -- the language spoken widely across northern Nigeria -- as "Western education is forbidden". 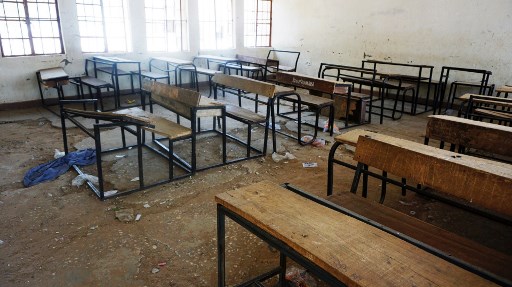 At least 2,295 teachers have been killed and more than 1,400 schools destroyed by the Islamist extremists since the conflict started in 2009, according to UNICEF.

While a 2015 offensive launched by Nigerian President Muhammadu Buhari successfully reclaimed swathes of territory back from the jihadists in Nigeria, the group still stages deadly attacks on both military targets and civilians.

In February, the Islamists shocked Nigerians by driving unopposed into the northeastern town of Dapchi and kidnapping over 100 schoolgirls.

Most of the girls have since been returned, but the brazen abduction revived painful memories of the Chibok kidnapping in 2014.

Of the 276 girls kidnapped by Boko Haram from the northeastern town of Chibok on April 14, 2014, over 100 are still missing.

In this file photo taken on March 23, 2018 released Nigerian school girls who were kidnapped from their school in Dapchi, in the northeastern state of Yobe, wait to meet the Nigerian president at the Presidential Villa in Abuja.