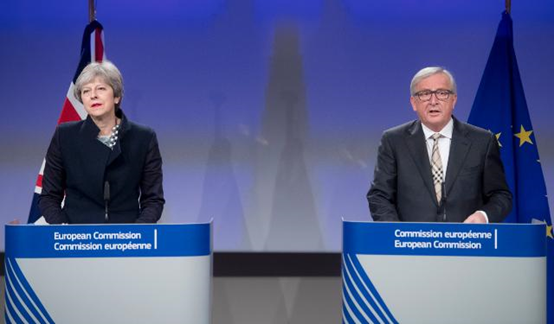 Juncker and May after Monday's Brexit lunch Photo: European Commission

Brussles (People's Daily)- The EU and UK failed to reach an agreement necessary to advance the next stage of Brexit talks.

After Monday’s meeting, EU Commission President Jean-Claude Juncker and British Prime Minister Theresa May told reporters Brexit talks will continue during the week so both sides can settle on a divorce agreement.

Juncker and May met for lunch and earlier with EU Brexit negotiator Michel Barnier to fine tune divorce agreements on citizens’ rights, finances, and the Irish border issue.

"Despite our best efforts and the significant progress we and our teams have made over the past days on the remaining issues, it was not possible to reach a complete agreement," Juncker was quoted as saying, later adding that there were "two or three" open items.

"On a couple of issues some differences remain, which require further negotiations and consultations," May concluded.

The Republic of Ireland is focused on the border issue.  Dublindecision-makers want Britain to make sure Northern Ireland remains a EU member nation keeping a “hard border” off the island.

It was reported the UK was prepared for Northern Ireland to remain in the EU's with its own market in all but name.

But Northern Ireland's DUP (Democratic Unionist Party) leader Arlene Foster said her party "will not accept any form of regulatory divergence" that separates Northern Ireland from the UK.