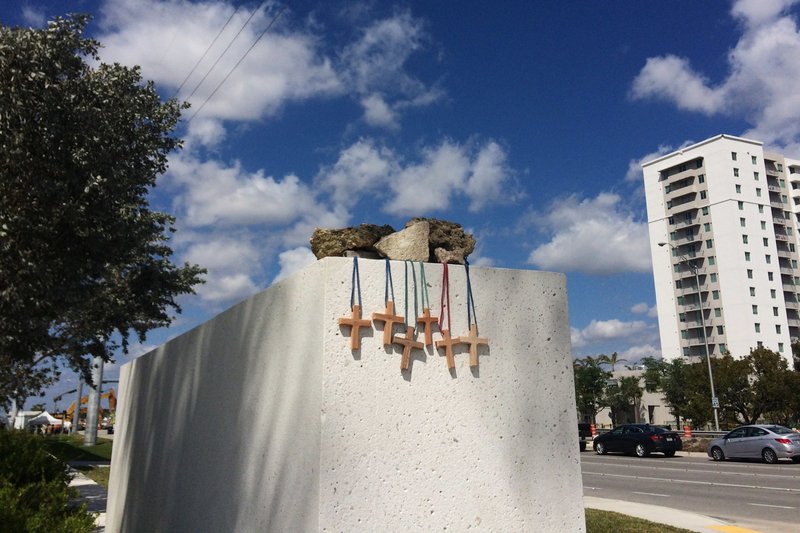 As crews removed bodies from beneath a collapsed pedestrian bridge Saturday, a victim’s uncle raged against what he called the “complete incompetence” and “colossal failure” that allowed people to drive beneath the unfinished concrete span.

“Why they had to build this monstrosity in the first place to get children across the street?” said an anguished Joe Smitha, whose niece, Alexa Duran, was crushed in Thursday’s collapse at Florida International University. “Then they decided to stress test this bridge while traffic was running underneath it?”

Authorities say six people were killed when the structure fell onto a busy six-lane road connecting the campus to the community of Sweetwater. Crews removed two cars Saturday morning and said they found three bodies, but officials said there were still at least two more victims beneath the rubble. Late in the day they recovered a third car, and Saturday night they said they believed all victims had been found.

Rolando Fraga Hernandez and his gold Jeep Cherokee were pulled from the wreckage Saturday. Later, the bodies of Oswald Gonzalez, 57, and Alberto Arias, 54, were found inside a white Chevy truck.

Navarro Brown was pulled from the rubble Thursday and later died at the hospital.

Authorities have not released Duran’s name, but her family has said she died. The FIU freshman was studying political science.

The National Transportation Safety Board has confirmed that crews were applying what’s known as “post-tensioning force” on the bridge before the failure. Authorities are investigating whether cracking that was reported just before the span fell contributed to the accident.

Experts interviewed by The Associated Press were mixed on the significance of those reported cracks.

Amjad Aref, a professor with the University of Buffalo’s Institute of Bridge Engineering, said they should have been “a big red flag.”

“Bridges are really very vulnerable when they are under construction, when there are just pieces,” he said. “It’s like still a flimsy structure. And when you see cracks, somebody has to raise really a big flag and say, ‘We need to do something. We need to figure out what’s happening quickly and do any mitigating actions to prevent further progression of damage and ultimately collapse,’ as we saw here.”

But Ralph Verrastro, principle of Naples-based Bridging Solutions, was not surprised to hear about cracks, and said it was not necessarily a problem.

“Any bridge with concrete, that’s made of concrete, there’s always cracks,” said Verrastro, who has been an engineer for 42 years. “If they had concerns that something was going on for that main span, then they would have called the sheriff or the police and closed the road. I would be very surprised if it’s determined that they were taking a chance and trying to do something under traffic. It’s just, as bridge engineers, that’s just never done.”

Two days before the collapse, an engineer with the design firm left a voicemail to say some cracking had been found at one end of the concrete span, but the voicemail wasn’t picked up until after the collapse, Florida Department of Transportation officials said Friday. In a transcript released Friday night, Denney Pate with FIGG Bridge Group said the cracking would need repairs but the company didn’t think it was a safety issue.

University officials, however, said Saturday that DOT officials had been aware of the cracking before the collapse. They said in a statement that representatives of FIU and DOT met with a FIGG engineer for two hours Thursday morning to discuss the cracking, and determined there wasn’t a safety issue. The bridge fell soon afterward.

“The FIGG engineer of record delivered a technical presentation regarding the crack and concluded that there were no safety concerns and the crack did not compromise the structural integrity of the bridge,” FIU said.

NTSB officials have said it’s too early to say whether any cracking contributed to the collapse.

In a news release late Friday, FIGG Bridge Engineers said it “continues to work diligently” to determine the cause of the collapse, and is examining the steps its team has taken. It added, “The evaluation was based on the best available information at that time and indicated that there were no safety issues.” It also asked for time to accurately determine what led to the accident.

Scheduled to open in 2019, the bridge was to provide safe passage over a canal and six lanes of traffic, a showpiece architectural feature connecting the campus with Sweetwater. The $14.2 million project was supposed to take advantage of a faster, cheaper and safer method of bridge-building promoted by the university.

Early renderings online appeared to show what’s called a “cable-stayed” structure supported by cables hanging from a central tower. However, a spokesman for FIGG said Saturday the bridge that was being built actually had built-in trusses.

“It is a truss bridge with above deck truss elements which, from an engineering perspective, is very different than a cable-stayed bridge,” FIGG spokeswoman Cheryl Stopnick said in an email.

Verrastro said there may have been enough support in place at the time. He said these projects are constructed with “very specific sequencing” and phases.

“This was designed to support itself — that was the beauty of the design, I’m sure,” he said. “You didn’t need temporary supports. It saves money. It’s safer, because if you put temporary supports, you have to block the road and the traffic would be a mess and it would be in the way. So I’m sure that was all thought through.”

Smitha, Duran’s uncle, can’t help but believe that this tragedy could have been avoided.

“This was a colossal failure of the system,” he said. “This was complete incompetence from the top ... I want someone to step up and say, ‘The buck stops with me.’”