Britain, France will back UN draft rejecting US Jerusalem move 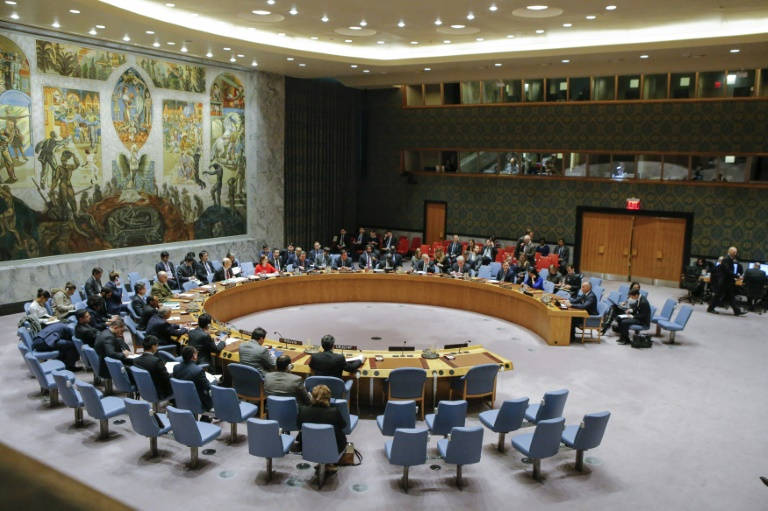 The UN Security Council meets to discuss a measure rejecting US President Donald Trump's recognition of Jerusalem as Israel's capital - Washington is expected to veto the draft Photo: AFP

The Security Council is set to vote on the proposed measure put forward by Egypt that would reaffirm that any decisions concerning the status of Jerusalem "have no legal effect, are null and void and must be rescinded."

Diplomats said they expected the United States to use its veto power to block the measure but that most, if not all, of the 14 other members are expected to back the draft resolution.

French Ambassador Francois Delattre praised the Egyptian draft resolution as a "good text" that is "completely in line" with current UN resolutions that reflect the international consensus on Jerusalem.

Delattre said France will support it and that he expected the "overwhelming majority" of council members to do the same.

Breaking with international consensus, Trump this month announced that he would recognize Jerusalem as Israel's capital and move the US embassy there from Tel Aviv, sparking protests and strong condemnation.

Aside from the United States, Britain, China, France and Russia can veto any resolution presented at the council, which requires nine votes for adoption.

US Vice President Mike Pence will visit Jerusalem on Wednesday, wading into the crisis over one of the most controversial issues in the Israeli-Palestinian conflict.

Israel seized control of the eastern part of the city in the 1967 Middle East war and sees all of Jerusalem as its undivided capital. The Palestinians view the east as the capital of their future state.

- No sidelining of the US -

British Ambassador Matthew Rycroft said the proposed text was in line with London's position on Jerusalem as an issue that must be resolved through negotiations.

Despite a likely US veto, Rycroft said the United States "will continue to play an extremely important role in the search for peace in the Middle East."

US Ambassador Nikki Haley signalled during a council meeting held ahead of the vote that the United States was ready to use its veto by recalling that the former US administration had abstained in a vote condemning Israeli settlements last year.

The council put Israeli-Palestinian peace "further out of reach by injecting itself" in the process, Haley said, recalling last year's vote.

"We will not make that mistake again," she warned.

After a brief open session, the council went into a closed meeting requested by Ukraine, a close US ally, to discuss the measure.

The draft resolution calls on all countries to refrain from opening embassies in Jerusalem, reflecting concerns that other governments could follow the US lead.

It demands that all member-states not recognize any actions that are contrary to UN resolutions on the status of the city.

Several UN resolutions call on Israel to withdraw from territory seized during the 1967 war and have reaffirmed the need to end the occupation of that land.

The Palestinians had sought a toughly-worded draft resolution that would have directly called on the US administration to scrap its decision, but the final version was softened to draw maximum support.

Backed by Muslim countries, the Palestinians are expected to turn to the UN General Assembly to adopt a resolution rejecting the US decision, if, as expected, the measure is vetoed by the United States at the council.