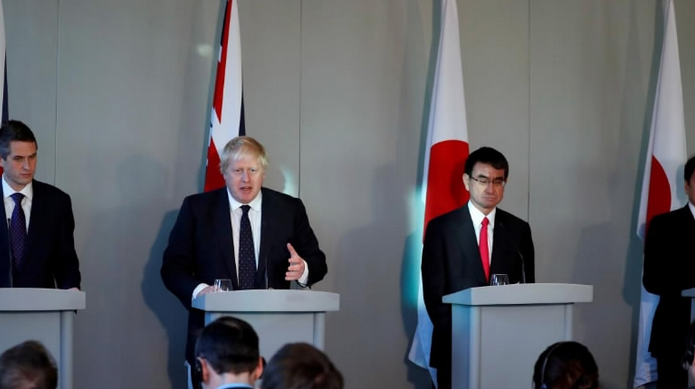 His comments came after Williamson and Foreign Secretary Boris Johnson met their Japanese counterparts at Greenwich Naval College to strengthen security and defense cooperation between the two countries.

Britain and Japan both agreed a three-year Defense cooperation plan, with a communique after Thursday's meeting saying: "It demonstrates the UK's dedication to working with Japan as a long-term security partner, including activity across air, land and sea in the Asia Pacific region."

As a signal of the closer ties, Britain will next year send 45 army personnel to train with Japanese soldiers, the first time British troops will exercise on Japanese soil. 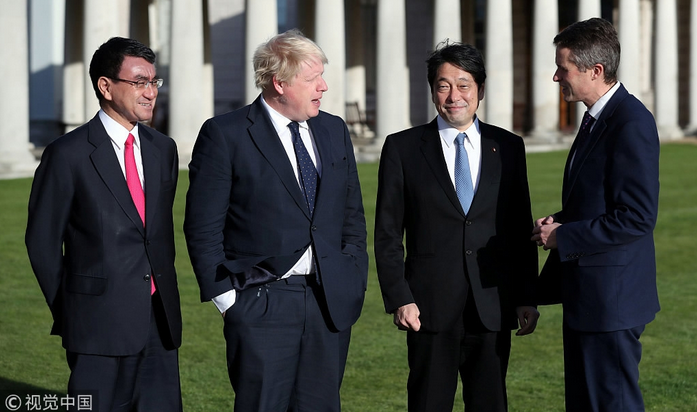 Japan and Britain said they hoped to achieve a swift deal on mutual recognition of each other’s standards for goods and services when Britain leaves the European Union.

Britain is looking to cement its relationship with Japan – whose firms have invested billions in the country’s auto and energy sectors – as it prepares to leave the EU in March 2019.

Earlier this year, May visited Japan to reassure her counterpart Shinzo Abe and concerned investors that Brexit will not make it a less attractive business partner.

Speaking at a meeting in London focused on foreign and defense policy, Japanese Foreign Minister Taro Kono said he wanted agreements with Britain on mutual recognition of standards and judicial support after Brexit.

“We have an agreement with the EU about those but with the coming Brexit I want to start preparing to make such agreements between Japan and the UK,” Kono said through a translator.

British Foreign Secretary Boris Johnson, speaking alongside Kono, said: “Of course it is exactly right that we need to protract the economic partnership agreement between the EU and Japan and make it specific to the UK.”

“But we believe in terms of mutual recognition, as Taro has just said, we believe that can be readily and speedily accomplished,” Johnson said.

During May’s visit to Japan in August, the two countries agreed to use an EU-Japan trade deal as the starting point for their new bilateral agreement.

A mutual recognition agreement, which would allow the two countries to accept each other’s rules as equivalent, would prevent the erection of technical barriers to cross-border trade. For example, this may mean there does not need to be separate goods testing processes in each country.

Britain is the second most important destination for Japanese investment after the United States.

Japanese companies including carmaker Nissan and conglomerate Hitachi have invested more than 40 billion pounds (53.68 billion US dollars) in Britain, and Japanese companies employ a total of 140,000 people in the country.

The total value of traded goods between the UK and Japan is around 13 billion pounds per year.

But Japan has been unusually outspoken about its concerns that Britain’s departure from the EU, which was decided by a national vote in 2016, could affect current and future Japanese investments in Britain.

Asked about the government’s handling of the Brexit process, Kono said he wanted it to be predictable and transparent.

Britain, Johnson said, would remain the best place in this hemisphere for Japanese and other companies to invest after Brexit.

Johnson also said that a rebellion in parliament on the legislation required to execute Brexit, which embarrassed May and complicated the legal exit process on Wednesday, would not stop Britain’s plans to leave the EU.

“Brexit is unstoppable,” Johnson said. “My view is it won’t for one second stop Brexit or stop the Brexit process.”