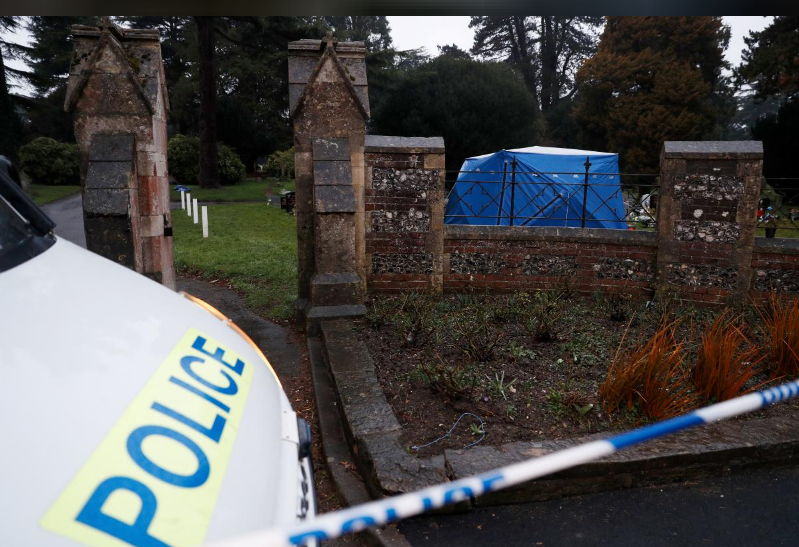 Britain deployed specialist troops on Friday to remove potentially contaminated objects from the English city where a Russian former double agent and his daughter were poisoned with a nerve agent.

Sergei Skripal, 66, who passed Russian secrets to Britain, and his daughter Yulia, 33, have been in intensive care since they were found slumped unconscious on a bench on Sunday afternoon in the quiet cathedral city of Salisbury.

Britain’s interior minister Amber Rudd, who visited Salisbury on Friday, said they were both still in a very serious condition, five days after collapsing.

About 180 troops including some with chemical expertise have been sent to the city to remove ambulances and other vehicles involved in the incident and other objects, Britain’s ministry of defense and police said.

“The public should not be alarmed,” counter-terrorism police, who are leading the investigation, said in a statement. “Military assistance will continue as necessary during this investigation.”

The incident has been likened to the case of former KGB agent Alexander Litvinenko, a critic of Russian President Vladimir Putin, who died in London in 2006 after drinking green tea laced with radioactive polonium-210.

Skripal betrayed dozens of Russian agents to British intelligence before his arrest in Moscow in 2004. He was sentenced to 13 years in prison in 2006, and in 2010 was given refuge in Britain after being exchanged for Russian spies.

Britain has said it will respond robustly if evidence shows Russia was behind the attempted murder. The Kremlin has denied any involvement in the incident and says anti-Russian hysteria is being whipped up by the British media.

Health chiefs have said there is a low risk to the wider public from the nerve agent used against the Skripals, who police said were deliberately targeted with the rare toxin. They said experts had identified the substance, which will help determine the source, but did not name it publicly.

A British public inquiry found the killing of Litvinenko had probably been approved by Russian President Vladimir Putin and carried out by two Russians, Dmitry Kovtun and Andrei Lugovoy. Lugovoy is a former KGB bodyguard who later became a member of the Russian parliament.

Both denied responsibility and Russia has refused to extradite them.

“In terms of further options, that will have to wait until we’re absolutely clear what the consequences could be, and what the actual source of this nerve agent has been,” Rudd said after visiting Salisbury and seeing the area around the bench where Skripal was found, now covered by a police forensics tent.

Speaking to reporters during a visit to the African Union headquarters in Addis Ababa on Friday, Lavrov said Russian officials had not received a single fact or piece of concrete evidence about what had happened to Skripal and his daughter.

“What we see is only news reports ... saying that if it is Russia, then a response is going to be given that Russia is going to remember forever. That is not serious. This is propaganda fair and square and it is trying to raise tensions,” Lavrov said.

“If someone wants us to engage in an investigation, be that on the poisoning of the UK subject or the rumors about alleged interference in the electoral campaign of the U.S., if you really need our assistance, then we will be willing to contemplate this possibility if we have the necessary data and facts.”

Twenty-one people were taken to hospital following the incident but apart from the Skripals only Detective Sergeant Nick Bailey, the first police officer on the scene, is still being treated. He remains in a serious condition although he is now able to talk, Rudd said.

She declined to give details of the police investigation. “We have to give the police all the space they need in order to collect all the information, to secure and to be able to be absolutely clear that there is no further risk,” Rudd said.

Police have cordoned off Skripal’s modest home in Salisbury, about 80 miles (130 km) from London, and erected forensic tents in the garden. Officers were guarding the area where he and his daughter were found, along with a pizza restaurant and a pub they had visited and the graves of Skripal’s wife and son.