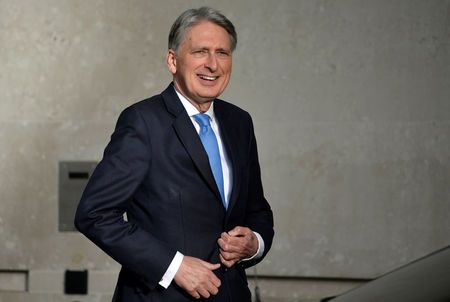 Britain's Chancellor of the Exchequer Philip Hammond arrives at the BBC in London, November 19, 2017. Photo: Reuters

Britain will submit its proposals on how to settle its financial obligations to the European Union before an EU Council meeting next month, finance minister Philip Hammond said on Sunday.

British Prime Minister Theresa May was told on Friday that there was more work to be done to unlock Brexit talks, as the European Union repeated an early December deadline for her to move on the divorce bill.

"We will make our proposals to the European Union in time for the council," Hammond told the BBC.

Last week, May met fellow leaders on the sidelines of an EU summit in Gothenburg, Sweden, to try to break the deadlock over how much Britain will pay on leaving the bloc in 16 months.

She signaled again that she would increase an initial offer that is estimated at some 20 billion euros ($24 billion), about a third of what Brussels wants.