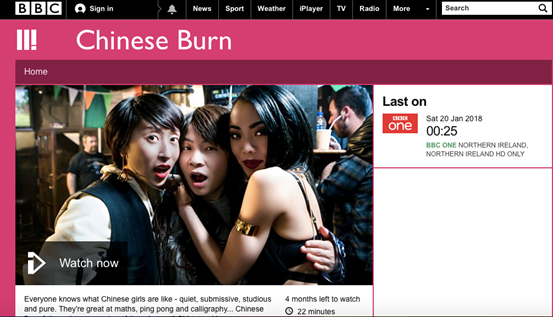 A photo from the BBC comedy "Chinese Burn"on the UK network's website.

The new BBC comedy “Chinese Burn” has stirred controversy with its depiction of Asian women.

The pilot episode made its online debut in November. The show’s aim was to smash stereotypes of Eastern Asian women as “quiet, submissive, studious, and pure,” traits that are mentioned early in the first episode.

The show’s premise centers around three young women from China, Jackie, Elizabeth, and Fufu, who live in London, England.

The three women do not possess any of the stereotypical characteristics Chinese girls are “supposed to” have to fulfill their dreams.

“The girls navigate life in the capital together and attempt to overcome the trials of modern life,” said BBC network executives.

But the question now is, has the show smashed Asian stereotypes or has it warped perceptions of Asian women even further?

In the show, Jackie is a girl with a half-shaved head and wears heavy makeup. She mocks other Asians by imitating their accents.

Elizabeth tries everything to seduce white men, while Fufu, who doesn’t escape from Chinese stereotypes, is an affluent 2nd generation immigrant, spending money without hesitation.

The pilot episode was laced with racist language and plenty of sexual innuendoes. It’s almost as if the show’s creators sat down to make a contemporary Chinese version of “Sex and the City.”

After its debut, Asian audiences in the UK became enraged. Many called or wrote to the BBC demanding they cancel the show based on the blatant stereotypes and ridiculous portrayals of Asian women depicted within.

In December, UK newspaper The Guardian featured an opinion piece written by a Chinese woman. She pointed out how the show reflected anxiety of diversity.

“Diversity is a real buzzword, and commissioning a show like 'Chinese Burn' ticks all the boxes,” she said.

“The BBC would also do well to commission more content on Chinese culture, such as documentaries, to showcase different sides of East Asia’s people and history – both at home and abroad. Otherwise, all we end up with is superficial advancement but with little or no improvement for genuine representation on TV,” the piece later stated.

This BBC scripted series reminds viewers of the first US network television comedy “Fresh off the Boat,” which made its debut in 2015.

It was the first US network half-hour comedy solely about an Asian-American family.

The show was a hit and received positive reviews from Asian and non-Asain viewers.

Rather than avoiding Asian stereotypes, the show featured a few characteristics of Chinese people, such as speaking loudly and bargaining with vendors and being exceptionally strict on their children's’ study habits, but all of it was meant to be a punchline.

The show also depicted the positive characteristics of Chinese people such as work ethic, honesty, and optimism.

Some Chinese in the US said that although the show mocked a few “weird habits” of Chinese people, it still reflected the Chinese-American family experience.

When compared to its US counterpart, “Chinese Burn” is delusional without drawing from the real lives of Asians in the UK.

This so-called comedy is nothing more than a joke.