HEADLINE Bronze relic looted from Summer Palace to be auctioned

Bronze relic looted from Summer Palace to be auctioned 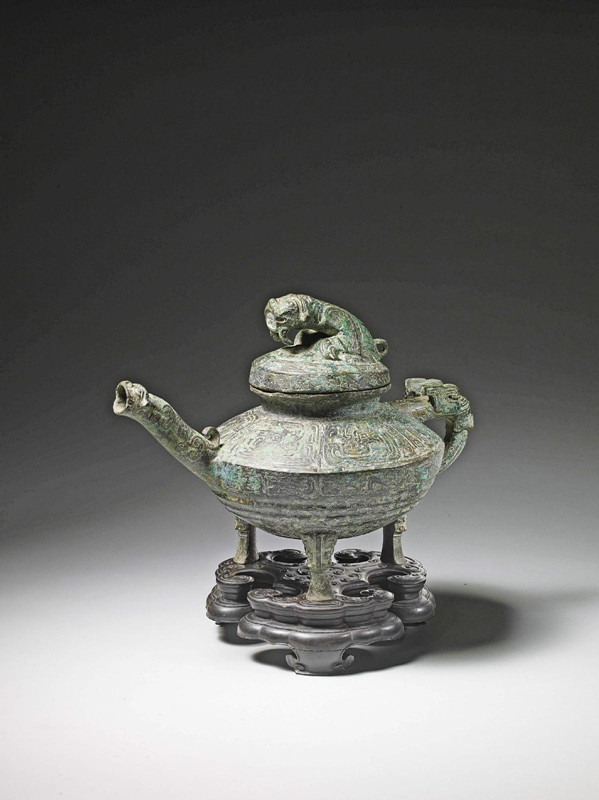 A bronze water vessel, known as Tiger Ying, is up for auction in Kent. (The Canterbury Auction Galleries/For China Daily)

A rare Chinese bronze water vessel believed to have been taken during the looting of Beijing's Old Summer Palace in 1860 has been discovered in Kent, southeast England.

According to The Canterbury Auction Galleries, only six similar archaic vessels, known as Ying, are said to exist, and five of them are in museums.

The vessel dates back to the Western Zhou dynasty (1027-771 BC). It is called the Tiger Ying because the spout and lid are both cast with models of the creature.

"When I was asked to view a small collection of Chinese bronzes in this unassuming house, I didn't imagine the door would open to an 1860s time capsule," he said. "The last thing I expected to find was this remarkable bronze."

Gibson said that there is nothing else comparable to the Tiger Ying in today's market.

"Only one Ying has ever been offered at auction before and none of the five others known is modelled with what in Chinese art is considered the king among beasts and the most powerful animal for warding off evil," Gibson added.

A thermoluminescence test on the pottery core of the handle and one foot was done in Oxford, determining the age of the bronze vessel to be between 2,200 and 3,500 years old.

The Summer Palace was looted and destroyed by British and French troops during the Second Opium War between 1856-60.

Also found was an archive of letters and photographs from Royal Marines Captain Harry Lewis Evans (1831-83), who fought in the war, gives a vivid account of his time in China.

Before arriving in Beijing, Evans had taken part in the capture of Canton in 1857 and was slightly wounded in the failed attack on the Taku Forts at the mouth of the Pei-ho River in 1859. 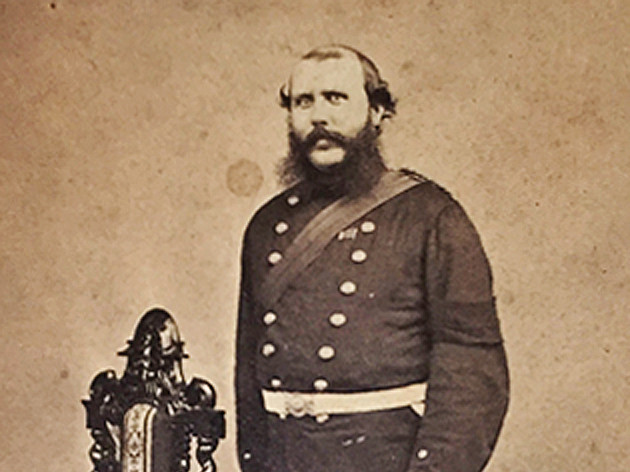 Letters from Captain Harry Lewis Evans describe the looting of the palace. (The Canterbury Auction Galleries/ For China Daily)

In a letter to his mother, dated Oct 17, 1860, he detailed the looting of the Old Summer Palace or Yuanmingyuan by British and French troops under the orders from the British High Commissioner to China, Lord Elgin.

It read, "Pekin (sic) is now virtually ours, one of the gates having been surrendered to us several days ago, on the day on which we were to have opened fire…

"In the morning however news came in that the French (who had also mysteriously disappeared) had, together with our Cavalry, taken possession of the Summer Palace the previous evening without opposition, there being only about 300 servants left to look after the place, and a small guard of about 50 men, who of course did not attempt any resistance."

Evans went on to described what the French took such as "valuable" watches, clocks, fur coats and silks, adding that the "General sent out for all the carts he could find, brought in as much as they could carry, and all the things were sold by auction for prize money for the force actually present on the 16th, and a considerable amount was realised as the things went at fabulous prices … I expect to get about five and forty pounds for my share."

In another letter, he wrote, "From the palace on the plain I succeeded in getting several bronzes and enamel vases that will, I hope, some day find their way to [his home in the UK], as well as some very fine porcelain cups and saucers of the Emperors imperial pattern (yellow with green dragons) but they are so dreadfully brittle that I quite despair ever being able to get them home in their present condition…"

Over 150 years after the ransacking and destruction of the Summer Palace, there have been efforts from Beijing to recover the stolen art and relics.

In 2009, China announced plans to send a team of specialists to museums and libraries - including the British Museum and the Victoria and Albert Museum in London – in an attempt to catalogue items that were taken.

That same year, auction house Christie's was asked by China to withdraw two Qing dynasty bronze animal heads, one depicting a rabbit and the other a rat, from its sale of Yves Saint Laurent's collection in Paris, claiming that they were looted from the Palace.

At the time, Christie's said the sale is legal and went ahead with the auction, but the Chinese buyer refused to pay for them.

In June 2013, Francois-Henri Pinault, owner of Christie's, returned the two bronze animal heads to China in a move to strengthen diplomatic and trade ties between France and China.

The bronze statues were put in the National Museum of China in Beijing.

It is also thought many Chinese treasures have been acquired by Chinese businessmen with the aim in repatriating the objects.

In 2007, Stanley Ho, the billionaire Macau casino magnate, bought a bronze horse head, believed to have been taken from the Summer Palace, for about $9 million and donated it to China.

According to UNESCO, about 1.64 million Chinese relics are housed in more than 200 museums in 47 countries.

The Chinese Cultural Relics Society estimated that China had lost more than 10 million antiques since 1840, due to wartime looting and illegal excavations. 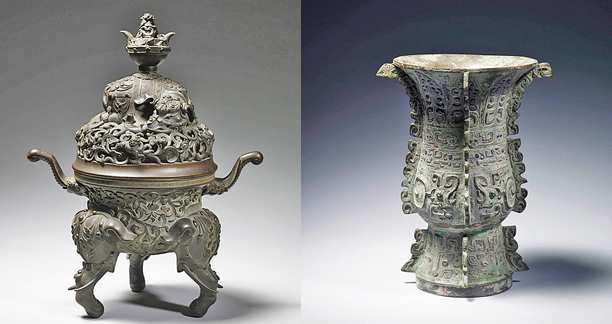 Other bronzeware vessels that will also be put on sale during the upcoming auction. (The Canterbury Auction Galleries / For China Daily)