HEADLINE Cabinet reshuffle: some new, some gone, some merged

Cabinet reshuffle: some new, some gone, some merged 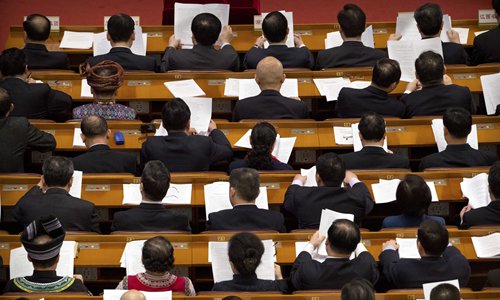 China unveiled a plan to restructure the government with a major cabinet reshuffle aimed at making the administration more efficient and service-oriented.The ministerial reform plan was submitted Tuesday to the ongoing first session of the 13th National People's Congress for deliberations.The plan will see some ministries merge, others restructure, new ones created and a few dissolved. Once the plan is implemented China's central government will have 26 ministries and commissions.There will also be new administrations including the immigration administration, an international development cooperation agency, and a banking and insurance regulatory commission.Compared with the current setup, the number of ministerial-level entities will be reduced by eight and that of vice-ministerial-level entities by seven.The reform, focusing on institutional restructuring in key areas, will strengthen the government's functions on economic management, market supervision, social management, public service, and ecological and environmental protection, said State Councilor Wang Yong, reported the Xinhua News Agency."It focuses on the needs of development and meets the people's expectations," Wang said.He said the cabinet reshuffle clears institutional obstacles to make the market play a decisive role in resource allocation. The reshuffle will also help China build a modern economy with high-quality growth.Another main theme of the reform is the strengthening of the leadership of the Party. The reforms will help "combat various efforts to deny, weaken and dilute the Party's leadership," Ding Xuexiang, a member of the Political Bureau of the CPC Central Committee, wrote in a commentary published in the People's Daily.In some areas, the weakening of the Party's leadership still exists, Ding said in the commentary. "This is also restricting the systematic development of the socialist market economy."Beginning 1982, amid its reform and opening-up, China began downsizing the central government about every five years, Xinhua reported.Need for changeThe new ministries that the State Council plans to establish reflect the need for change, experts said.A State immigration administration is to be set up under the Ministry of Public Security to formulate and enforce immigration rules, as the number of foreigners working and living in China has been increasing, raising new requirements on immigration administration and services.""This shows that China is becoming more confident in opening to the international community, and foreigners in China will receive better service," said Wang Huiyao, founder and president of the Center for China and Globalization, a Beijing-based think tank.The proposed administration will be responsible for formulating and implementing immigration policies including border control, administering visas for foreigners, the management of refugees and nationality, taking the lead in coordinating the administration of foreigners who illegally enter, work or overstay in China, and the repatriation of illegal immigrants, Xinhua reported.The welfare of military personnel will be better protected with the establishment of a new ministry devoted to veterans' affairs."A well-developed and sophisticated care system for veterans will provide more confidence and conditions to the country when considering the use of military forces overseas," said a military expert and PLA veteran who asked for anonymity."If the government can't protect and take care of veterans, then the young people's will to serve in the military will be damaged, and the source of the country's military strength will weaken," Zhu Lijia, a professor of public management at the Chinese Academy of Governance, told the Global Times on Tuesday.The move aims to protect the legitimate rights and interests of military personnel and their families, improve the service and management system of demobilized military personnel, and make military service an occupation that enjoys public respect, Xinhua reported.A banking and insurance regulatory commission will be formed to replace the China Banking Regulatory Commission and the China Insurance Regulatory Commission. The new body will be more effective at forestalling risks in the financial sector.The international development cooperation agency, to be formed by merging parts of the Ministry of Foreign Affairs and the Ministry of Commerce, will "give full play to foreign aid as a key means of major-country diplomacy," Wang said.