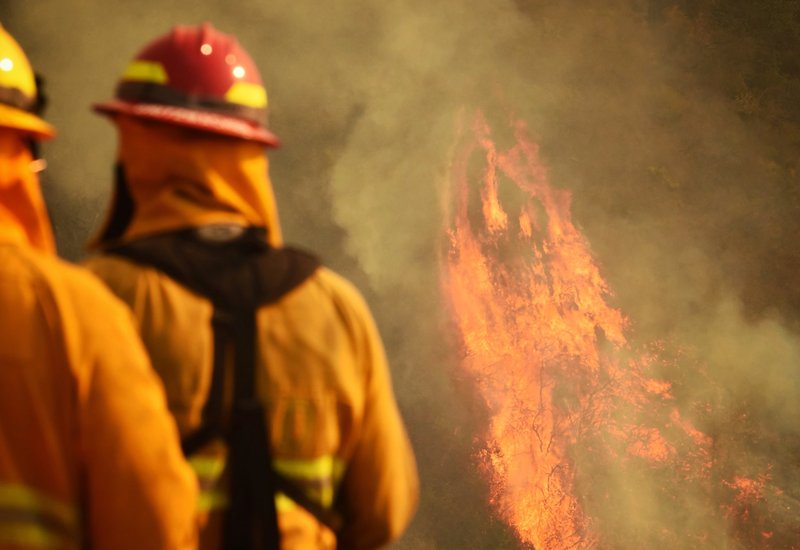 Southern California firefighters on Wednesday continued working to contain the fifth largest fire in the state’s history but warned that some communities are still at risk and could be in greater danger if unpredictable winds whip up again and fan the flames.

Warnings of ideal conditions for wildfires were extended because of Santa Ana winds and lack of moisture, with a possible increase in wind gust speeds at the end of the week.

Evacuations continued for the seaside enclaves of Montecito, Summerland and Carpinteria and the inland agricultural town of Fillmore.

The so-called Thomas fire has burned over 900 buildings, at least 700 of them homes, since it broke out Dec. 4. It stretches across nearly 370 square miles (958 square kilometers) of Southern California.

Elsewhere, fire officials announced that a cooking fire at a homeless encampment sparked a blaze last week that destroyed six homes in the exclusive Bel Air neighborhood of Los Angeles.

Arson investigators determined that the so-called Skirball fire near the world-famous Getty museum was started by an illegal fire at a camp near a freeway underpass, city fire Capt. Erik Scott said.

The camp was empty when firefighters found it, but people apparently had been sleeping and cooking there for at least several days, he said.

Rock and Roll Hall of Fame member Eric Burdon and his wife, Marianna were among the people who fled the smoke in the small city of Ojai Tuesday.

Burdon, a member of the 1960s British Invasion band The Animals, wrote on Facebook last week about having to flee and returning temporarily to find his home still standing with ashes all around it.

“A week like this gives you the perspective that life is what truly matters,” he wrote.

A photo accompanying the post showed his handprint and signature written in ashes.