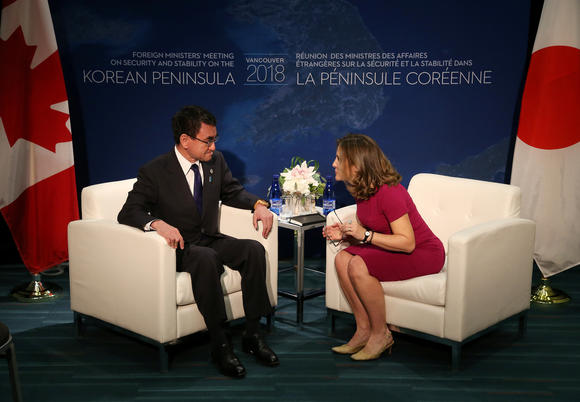 Vancouver (People’s Daily)-Canada said Monday that “a negotiated, diplomatic solution” to the North Korean nuclear and missile programs is both “essential and possible” a day before the start of a foreign ministers’ meeting in Vancouver.

The announcement also said the Vancouver meeting will demonstrate solidarity in opposition to North Korea’s “dangerous and illegal actions and work together to strengthen diplomatic efforts toward a secure, prosperous and denuclearized Korean Peninsula.”

The Vancouver foreign ministers’ meeting on security and stability co-hosted by Canada and the US is scheduled to take place in Vancouver on Tuesday. The meeting will review the current situation on the Korean Peninsula and discuss sanctions, non-proliferation and future steps. US State Department Policy Director Brian Hook said the main purpose of this meeting is to exert maximum pressure on North Korea to curb its nuclear and ballistic missiles programs.

The 20 countries attending the meeting include Canada, the US, Japan, South Korea, the UK, France, Belgium, the Philippines and Colombia.

Russian Foreign Minister Sergei Lavrov told a Moscow media briefing that “we consider these efforts and this meeting to be destructive.”

Some analysts and observers are not optimistic about what this meeting will achieve.  According to one report in the Globe and Mail newspaper, Korean experts agree that the talks will accomplish very little without China and Russia at the table.