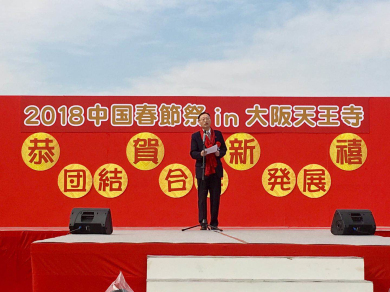 A three-day celebration for the Chinese Spring Festival kicks off in Osaka in western Japan on Feb 16, 2018. fmprc.gov.cn photo

A three-day celebration for the Chinese Spring Festival kicked off in Osaka in western Japan on Friday, the first day of the Chinese Lunar New Year.

Since early in the morning, Tennoji Park in downtown Osaka, where the celebration was held, was filled with festival atmosphere with red lanterns and flags hung high.

A number of Chinese artists gave shows on a spectacular stage set up in the center of the park, including face-changing stunt of Sichuan opera, acrobatics and lion dances.

People also lined up before the around-70 booths which sold traditional Chinese cuisine, including dumplings, candied haws in sticks, and others.

"It was the first time for us to attend a celebration event for Chinese Spring Festival. It's so great. I hope such celebrations could be held every year," said Maeda, a Japanese lady who came to the event together with her husband and children. 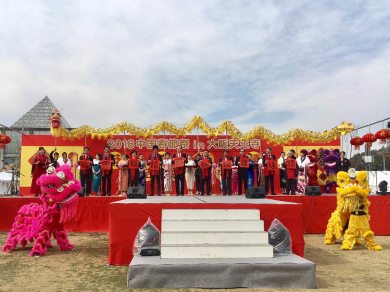 A three-day celebration for the Chinese Spring Festival kicked off in Osaka in western Japan on Friday. fmprc.gov.cn photo

"Chinese Spring Festival is the most important holiday in China and a shared cultural event for all Chinese," said Li Tianran, Chinese consul general in Osaka.

"Now celebrations of the Chinese Spiring Festival are being held in multiple cities in Japan and have become an important platform for promoting mutual understanding between Chinese and Japanese people," he said.

"As this year marks the 40th anniversary of the Treaty of Peace and Friendship between China and Japan, it is hoped that people in the two countries could further enhance communication and cooperation and accumulate more positive energy for bilateral ties," said Li.

According to the organizer, about 150,000 people are expected to visit the three-day celebration, including not only nostalgic Chinese immigrants, but also Japanese citizens and foreign tourists who are fascinated by the Chinese culture.