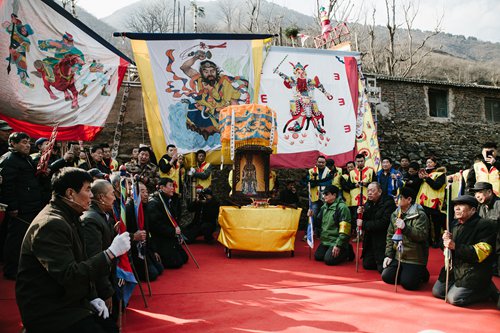 Villagers from the Qianjuntai and Zhuanghu villages in Beijing gather together for the traditional "Flag Meeting"parade on Friday. Photo: Li Hao/GT 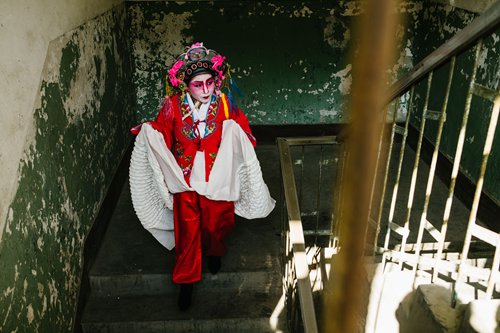 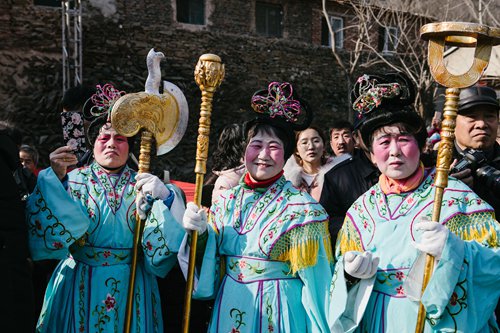 It was a sunny Friday. Han Dawei, 31, got up early and prepared for a long morning drive. Working in downtown Beijing for years, he had asked for a day off because he had something much more important to do for the day: Return his rural home for a traditional event whose origins dated back some 500 years. Fanhui, or Meeting of Ancient Flags, originated in Qianjuntai and Zhuanghu villages in what is now the Mentougou district southwest of Beijing during the Ming Dynasty (1368-1644). As a historical product of the traditional temple fair, the event serves as a platform for villagers to pray to various gods for good fortune during the coming year. The fair starts on the 15th of the first lunar month, the same day as the Lantern Festival, and lasts for two days. This year, the event fell on March 2 and 3. 'Fun with flags' The loud sound of drums and gongs ringing in the air, a live band playing traditional music, people dressed in traditional clothing and face paint as they perform the Yangko dance in a parade… the ancient Qianjuntai village, where Han grew up, came back to life for the festival after a long winter. "Hold on! Hold it straight!" One flag carrier roared to his team as they struggled to hold up a tall flag against the blowing wind. A total of 20 huge flags with the images of 23 different gods - each more than 6-meters tall and weighing 40 to 50 kilograms - were paraded down a narrow stone-paved path. A long rope was attached to the top of each flag pole to help the team keep them balanced. It's said that the more stable the flags are, the more respect shown to the gods. The parade, the most lively and exciting part of the event, started around three in the afternoon at the eastern edge of Qianjunutai where organizers from Qianjuntai and the neighboring Zhuanghu village greeted each other and then prayed to the gods together. "It's a big activity for all. Anyone can take part, no matter how old you may be," said Han, who, when he was little, first joined the parade as a dancer and now acts as a flag bearer. Thousands of visitors from outside the village followed behind the parade, forming a huge crowd, while many locals set up altars along the way so all could pay their respects to the gods. Walking slowly in the parade, young bearers showed off their skills with the flags: Some balanced the heavy flag poles in their open mouths or on their shoulders, while Han and his friends took turns showing off their strength by carrying their flag in a single hand. These feats incited loud applause and cheers from the crowd. More than a tradition All the performers were local villagers or their descendants."It's a form of faith that we pass on through the generations. This tradition brings us together no matter where we are," said Sun Yuhui, one of the organizers of the event. Now in his 60s, Sun has been involved in this festival in one way or another since he was a child.   "The event welcomes all these gods to the village and then sees them off the next day," said Sun. Most of the gods celebrated at the event are Taoist, such as Caishen (God of Wealth) and Tudiye (Lord of Soil), the latter of which reflects the villages close ties to ancient agricultural culture. The event brings together gods overseeing every aspect of life so that people can pray for anything they may need during the festival instead of having to make a special pilgrimage to a particular god's temple.Moreover, the festival is a great opportunity for the villagers and those family members that have left the village to get together. According to Sun, the Fanhui is more important than any other festival for villagers, even Chinese New Year. It is the one time in a year that everyone returns to the village to celebrate their shared cultural identity. "It has a strong sense of togetherness and everyone enjoys it, both young and old," Sun said, explaining that many villagers have already left to make their way elsewhere, leaving fewer than 30 people still living in the Zhuanghu village. However, former residents try their best to return at this time of the year, freely volunteering their time to organize and participate in the event.  "It makes us happy and we enjoy doing it," said one 60-year old returning resident surnamed Zhang. While she hasn't lived in the village for a long time now, she comes back every year to perform the traditional Yangko dance. Her husband, daughter and son-in-law also take part in the event. "It reminds me that my roots are here," said Han. "In my heart, my home will always be here."