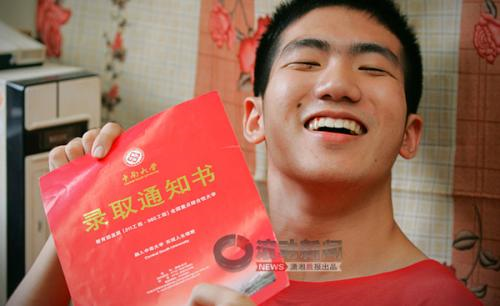 According to China News Service, Mo has never been able to stand or walk unassisted, and small tasks such as speaking or swallowing cause spasms.

Diagnosed with cerebral palsy just one week after he was born, after doctor’s confirmed that Ma’s congenital motor nerve was damaged they thought he could be intellectually disabled.

It was also around this time that his father’s company went bankrupt, forcing the family to live on nothing but cabbage for weeks.

When tries to write, his fingernail presses into his extended finger, causing it to bleed which forces him to write slower than most people.

Mo’s academic achievements are even more extraordinary when taking into account the disadvantages he has overcome.

Since elementary school, Mo has always been one of the top students in his class.

After completing his undergrad, he was accepted into graduate school without having to take the entrance exam.  As a graduate student, he would go on to make high grades.

Since college, Mo has been the project leader on three research projects and that have been published in nationwide academic journals.

Two of his research papers were selected by the 2014 and 2015 Asia Pacific Service Computing Conference (APSCC).

As a college student, he had the rare opportunity visit with Vint Cerf, one of the founding fathers of the Internet.

“I do not think this is a miracle. I take everything seriously. I have worked very hard and always double my efforts because I do not think I was born with talent,” says Mo when responding to comments about him that use the words “miracle” and “genius.”

“I am an ordinary person. I experience the same pain that all students go through, it is just my body that’s different, which is painful,” Mo explained.

Mo spent three months studying the TOEFL by using earphones, and although his ears are damaged, he earned the score he wanted.

“My appreciation for the warmth and love that everyone has given me over the years, I will try my best and spread the love,” said Mo, who hopes to return the love and support he has received from his classmates.