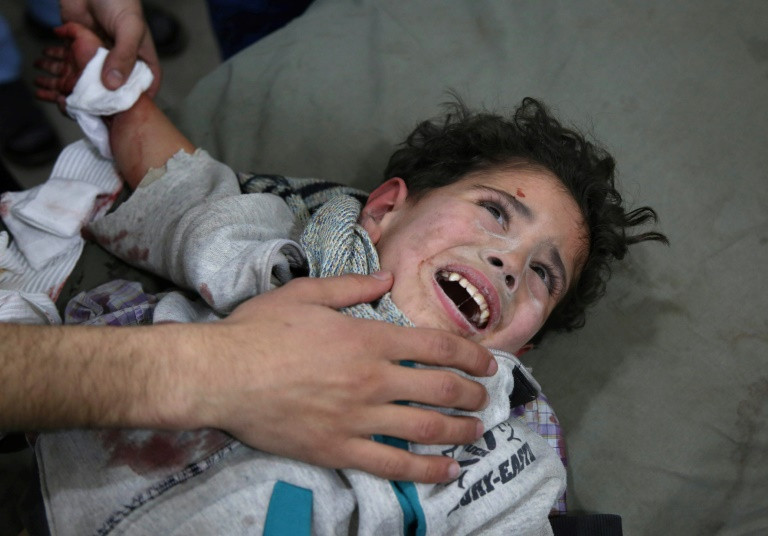 The Syrian regime rained rockets and bombs on Eastern Ghouta Thursday, killing another 36 civilians as international pressure mounted to stop the carnage in the rebel-held enclave.

Calls for a humanitarian truce in one of the bloodiest episodes of Syria's seven-year conflict went unheeded as the death toll for Damascus's five-day blitz rose to 385.

UN chief Antonio Guterres said the aerial bombing campaign had turned Eastern Ghouta into "hell on earth", while German Chancellor Angela Merkel called for an end to the "massacre".

Residents huddled in basements as government forces pounded the besieged enclave with rockets and bombs, turning towns into fields of ruins and even hitting hospitals. 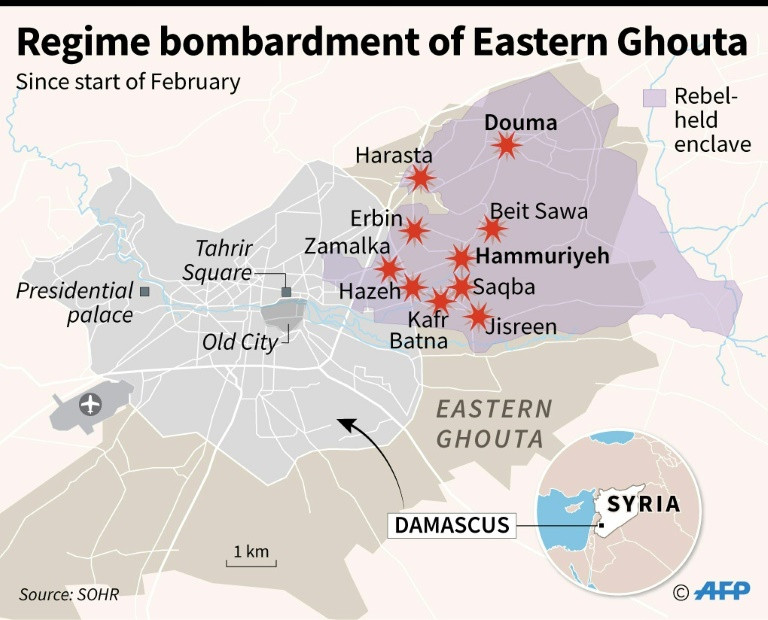 Aid group Doctors Without Borders said 13 of the facilities it supports in Eastern Ghouta were damaged or destroyed in three days, leaving remaining staff with very little to save the hundreds of wounded brought to them every day.

In the hospital mortuary in Douma, the main town in the enclave just east of Damascus, bodies wrapped in white shrouds were already lining up on the floor, two of them children.

Little pools of blood dotted the way to the hospital, where most of the victims of the sustained rocket fire unleashed by government troops on Thursday were taken. 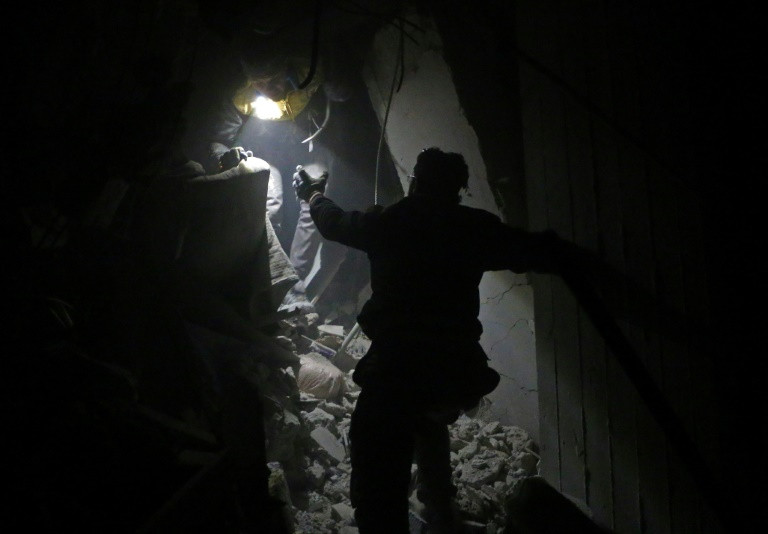 "The rocket fire hasn't stopped this morning. Around 200 ground-to-ground rockets struck Douma alone," said Rami Abdel Rahman, head of the Syrian Observatory for Human Rights, a Britain-based war monitor which relies on a network of sources on the ground.

Morning rain appeared to initially keep warplanes away but the sky cleared by midday and jets, some of them Russian according to the Observatory, soon returned.

Russia has so far denied direct involvement in the assault on Ghouta but the pro-government Syrian newspaper Al-Watan reported on Thursday that Russian warplanes and advisers had joined the battle.

Regime and allied forces have been massing around the enclave, in which an estimated 400,000 people live, ahead of a likely ground offensive to flush out holdout Islamist and jihadist groups.

"We are 14 women and children living in a room that is 10-feet wide, with no toilet and nowhere to wash," said 53-year-old Umm Abdo, who joined a large group in the basement of a school in Arbin. 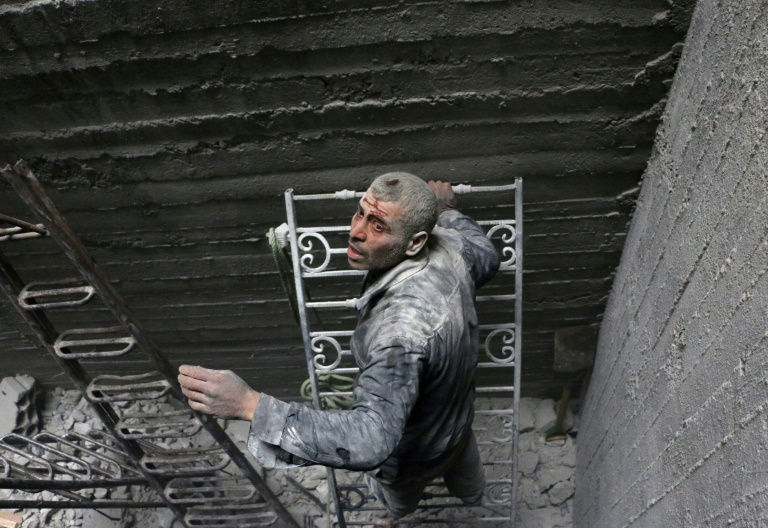 A wounded Syrian man helps to look for survivors in the Eastern Ghouta rebel enclave on February 22, 2018.AFP / Hamza AL-AJWEH

The brief respite provided by the rain on Thursday encouraged some residents to venture out of their basements and shelters, to buy food, check on their property or enquire about their relatives and neighbours.

In the town of Hammuriyeh, a queue had formed outside a shop as starving residents tried to stock up but another rocket sowed panic and sent everybody back to their shelters.

In Douma, a young boy tried to peddle lighters on the street but rocket fire quickly forced him to scamper back to cover.

An AFP correspondent saw rescuers known as the "White Helmets" forced to stop their efforts to retrieve a wounded woman from the rubble of a collapsed home when air strikes resumed.

When they ventured back to the site, the woman was dead.

The indiscriminate bombardment and the strikes on medical facilities sparked global outrage but few concrete options emerged to stop the bloodletting.

"The killing of children, the destruction of hospitals -- all that amounts to a massacre that must be condemned and which must be countered with a clear no," Merkel said. 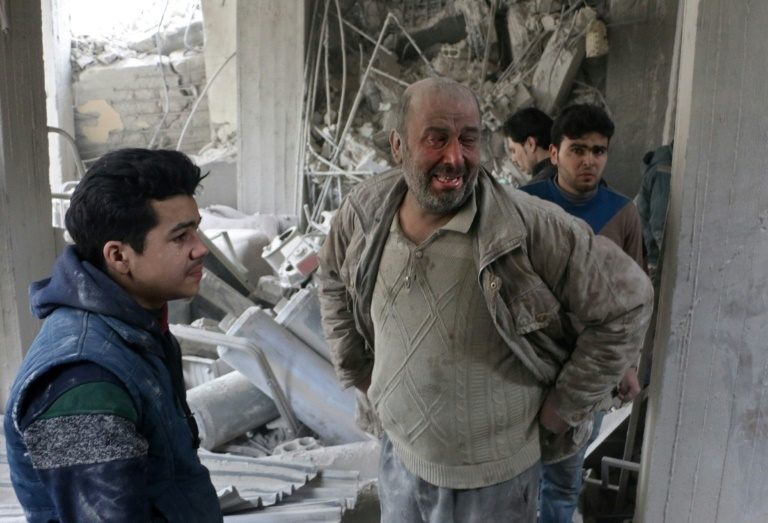 Syrians cry as they look for survivors at the site of regime bombardment in Eastern Ghouta on February 22, 2018.AFP / Hamza AL-AJWEH

Russia has asked for a special meeting of the UN Security Council and the Red Cross has demanded it be allowed to enter the besieged enclave to help overwhelmed doctors and nurses to treat the wounded.

The aid community voiced its frustration as the world appeared once again powerless to stop a conflict that has left almost 350,000 dead in seven years and caused destruction rarely seen since World War II.

Humanitarian agencies are "sickened that no matter how many times they've raised the alarm, taken the step of speaking out, called on the Security Council to do something, the violence and brutality will sink to new lows," a statement by the Syria INGO Regional Forum said.

Talks for a deal between the regime and the armed groups controlling Ghouta appear to have stalled.

Russian Foreign Minister Sergei Lavrov said during a press conference in Belgrade that jihadist fighters in Ghouta had rejected an evacuation deal.

"A few days ago, our military in Syria suggested to the fighters that they withdraw peacefully from Eastern Ghouta, like the evacuation of fighters and their families that was organised in East Aleppo," he said.