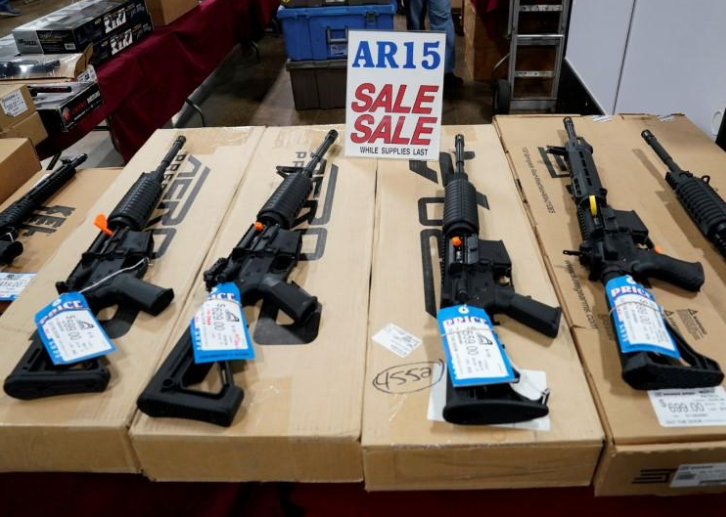 AR-15 rifles are displayed for sale at the Guntoberfest gun show in Oaks, Pennsylvania, US, October 6, 2017. (Photo: Reuters)

A Chicago suburb has banned the possession, sale and manufacture of assault weapons and large-capacity magazines in response to the massacre at a Florida high school and other recent mass shootings in the United States.

Residents of Democratic-leaning Deerfield, Illinois have until June 13 to remove any firearms and magazines that fall outside the new restrictions or face a fine of between $250 and $1,000 per day, according to an ordinance passed by the town board on Monday night.

The ban was a direct response to the Feb. 14 killing of 17 people at Marjory Stoneman Douglas High School in Parkland, Florida and the student-led campaign for tighter restrictions on guns inspired by the mass shooting, the ordinance said.

The Deerfield decision is likely to face legal challenges from gun rights groups that see it as a violation of their constitutional rights.

A similar ban in Highland Park, Illinois was challenged all the way to the US Supreme Court and upheld.

“We hope that our local decision helps spur state and national leaders to take steps to make our communities safer,” Deerfield Mayor Harriet Rosenthal said in a statement.

Opponents of the ban fear the town will now try to outlaw other firearms, further violating their right under the Second Amendment of the US Constitution to own guns.

“First it’s going to be assault rifles. There will be new bans in the future. It’s just a matter of time,” Deerfield resident Larry Nordal told the Chicago Tribune. Nordal did not immediately respond to a request for further comment.

The ban defines assault weapons as a range of firearms such as semiautomatic rifles like the AR-15, a gun similar to the one used in the Florida massacre. High-capacity magazines are defined as those holding more than 10 rounds.

“This is our generation’s fight. We’re going to keep fighting and this is part of it. Change happens gradually step by step,” Kharasch told the Chicago Tribune.