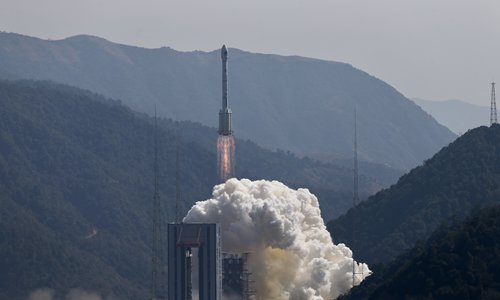 China on Monday launched two BeiDou-3 satellites into space at the Xichang Satellite Launch Center in Southwest China's Sichuan Province. The two satellites were the fifth and sixth in the BeiDou-3 Project. The satellites are said to be part of a fleet that will expand the BeiDou system to a global navigation coverage.Since January 12, four BeiDou satellites have been sent into space by Long March-3B rockets. It was also the seventh successful launch of the Long March series of rockets this year. The Chinese navigation system is being developed and deployed in three phases. BeiDou-3 aims for full operational capability by 2020 with a constellation of 35 satellites, according to The Beijing News. The BeiDou-3 network is said to be twice as accurate as the BeiDou-2 network. Chinese President Xi Jinping visited the satellite launch site Saturday ahead of the launch.Xi, also general secretary of the Communist Party of China Central Committee and chairman of the Central Military Commission, inspected preparations for the launch while visiting the site's command center.He talked with the scientists and engineers, and asked them about their research, work and lives.He told them to keep pursuing precision and perfection to ensure the success of the launch.