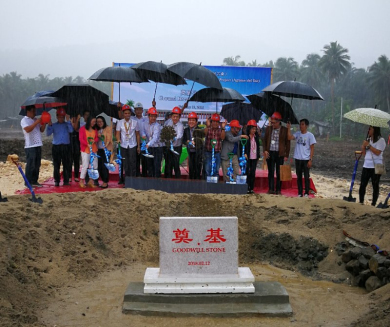 Jin Yuan, Economic and Commercial Counselor of Chinese Embassy in Manila and Philippine Undersecretary of the Department of Health Roger Tong An attended the groundbreaking ceremony.

Two countries agreed to build two drug rehabilitation centers in the Philippines, as part of deals made by President Rodrigo Duterte in his visit to China in October 2016.

"With only one year and two months, our two leaders' visions are quickly bearing fruits, and the China-Philippines bilateral cooperation has brought tangible benefits to our two peoples," said Jin when addressing the ceremony.

Representing the Philippine government, An lauded the project and thanked China for its help in the government's relentless fight against illicit drugs.

In a statement, the Chinese Embassy said the rehabilitation center, which has a floor area of 6,750 square meters, can accommodate approximately 150 beds. The construction is expected to finish within 21 months.