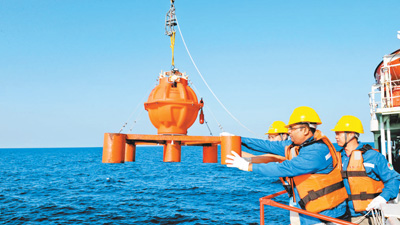 Scientists on board the “Experimental 3” survey ship lower a seabed seismograph into the ocean. (Photo: Xinhua/Zhang Jiansong)

China’s “Experimental 3” survey ship arrived at the Mokran trench in the North Indian Ocean on January 14, 2018, marking the beginning of the first ever China-Pakistan joint maritime scientific expedition.

Scientists from the two countries on board will conduct a three-week comprehensive marine survey focusing on the geological structure of the trench and geological disasters such as earthquakes and tsunamis in neighboring areas.

The joint research project is being led by the Chinese Academy of Sciences’ (CAS) South China Sea Institute of Oceanology. More than 70 members from over 10 Chinese research institutes and many Pakistani organizations are participating in the expedition. Lin Jian, a scientist with CAS, is leading the project.