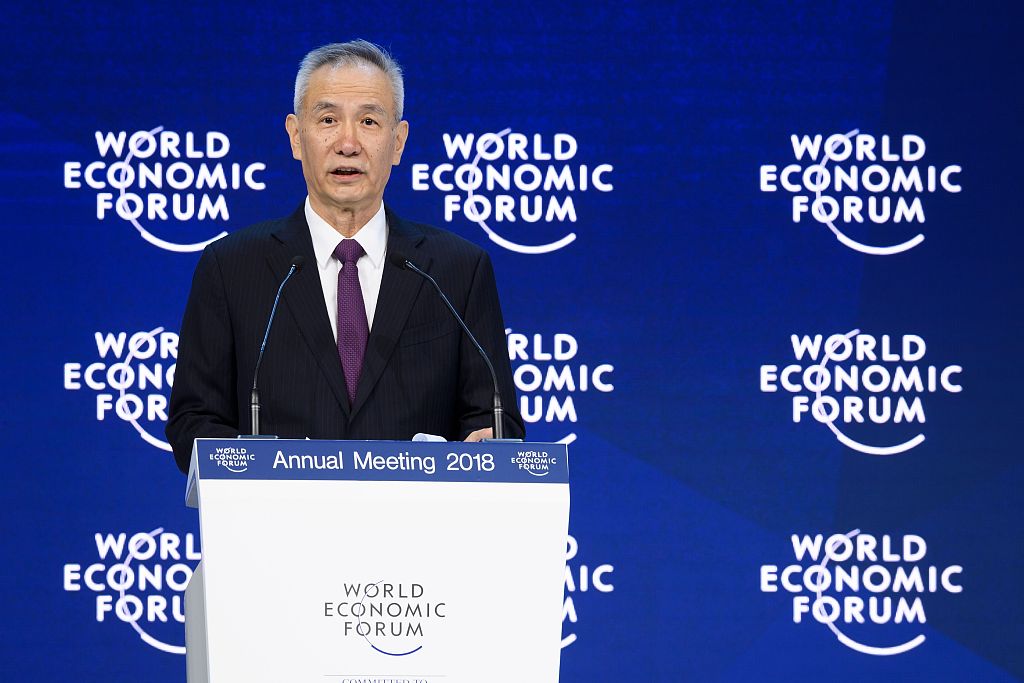 Member of the Political Bureau of the Communist Party of China (CPC) Central Committee Liu He delivers a speech at the annual World Economic Forum (WEF) on January 24, 2018 in Davos, eastern Switzerland. - Fabrice COFFRINI, VCG photo

Davos(People's Daily) - Liu He represented China and explained China's economic policy to the world elite in a Davos plenary session on Wednesday.

As a member of the Political Bureau of the Communist Party of China Central Committee and director of the General Office of the Central Leading Group for Financial and Economic Affairs, Liu gave a speech titled “Pursue high-quality development, work together for global economic prosperity and stability,” shedding light on how China intends to shape the world economy, and explaining the top-level plan for the nation's economic policy.

Liu shared his observation that the 19th Party Congress established China’s new central leadership with Xi Jinping at its core, noting that “Xi Jinping Thought on Socialism with Chinese Characteristics for a New Era” was adopted as the guide to China’s development. This maps out the objectives of completing the building of a moderately prosperous society in all respects by 2020 and turning China into a great modern socialist country in two steps by 2050, Liu said at the speech.

The report of the 19th Party Congress is a highly transparent policy agenda. It lays out the promises that will be delivered to the Chinese people. The fulfillment of this agenda will also bring about new opportunities for the development of other countries in the world. Liu recommended the report to delegates who are keen to learn more about China’s future policies.

Liu also talked about China's economy in the near future, explaining what high quality development means to the world.

There are three challenges to resolve within three years, including preventing and resolving the major tasks laid out in the plan, conducting targeted poverty reduction and controlling pollution, Liu said. “We will continue to make progress while maintaining stability. In about three years’ time, we will strive to bring the overall leverage ratio under effective control, make the financial system more adaptable and better able to serve the real economy, prevent systemic risks and facilitate better flow of economic activities,” he said.