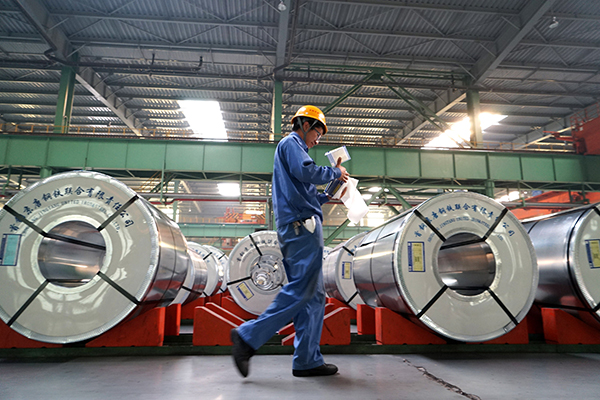 Chinese government and the targeted industry blasted the steel and aluminum tariffs officially announced by the White House late Thursday, saying it breaks the international trade rules and will harm itself.

The Chinese commerce ministry said it strongly opposes US tariffs on Chinese steel and aluminum imports, blaming it as an act of trade protectionism that was carried out in the name of national security. It said China will assess the impact and take strong measures to defend its legitimate rights.

Wang Hejun, head of the ministry's Trade Remedy and Investigation Bureau, said in a written statement that accused the US of abusing the trade rules available.

The US imports of steel and aluminum are almost for civil use and impose no threat on the country's national security, the statement said, adding that its action will severely destroy the multilateral trading system represented by the WTO and is sure to impact normal international orders.

China Steel Association echoed the commerce ministry's statement and asked the government to take strong action against some US imports.

The Trump Administration is challenging the global steel industry and will face broader opposition, the association said in a statement following the announcement.

Just a day ahead of Trump's official announcement, Chinese foreign minister Wang Yi urged the US to drop the confrontational mindset in regards to the trade area, warning China will take a justified and necessary response.

The tariff decision also angered the EU, a major US ally. France Economy Minister Bruno Le Maire responded with regret and said France would align with other EU partners to assess "consequences on our industries and agree on an appropriate response."