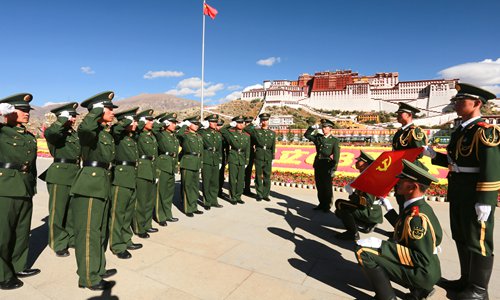 Armed police in the Tibet Autonomous Region make a vow to safeguard the 19th National Congress of the Communist Party of China (CPC) in front of the flag of the CPC. Photo: IC

Public security forces and volunteers are being mobilized nationwide to boost security as the 19th National Congress of the Communist Party of China (CPC) prepares to convene on October 18 in Beijing.
Cai Qi, secretary of the Beijing Municipal Committee of the CPC, said that all departments should strengthen coordination during the 19th CPC congress to ensure security in Beijing "at the highest level, with the strongest organization and the most effective measures." He also noted that ordinary citizens should be deployed on this mission, the Beijing Daily reported.
Easily identifiable volunteers wearing bright red armbands, some of whom are senior citizens, can be seen in both Beijing's wide streets and narrow alleys. In some important locations, they take shifts to ensure there is vigilance round the clock. Recent years have seen these volunteer groups making great contributions to cracking down on illegal activities.
Meanwhile, armed police are also strengthening their efforts in patrolling Tiananmen Square.
Passengers on Beijing-bound trains from many cities are also subject to more stringent checks. In Shanghai, passengers have to go through a facial recognition security system.
Beijing's not alone in upgrading its security levels. Other provinces are also joining the effort with many military and police forces holding emergency drills.
In addition to the heightened security measures, cleaners are now working extra hours on the grounds at Tiananmen Square. They have to meet the requirement that a white shirt should remain clean even after it has been used to rub the ground. Tiananmen Square is usually cleaned each year in late May and October, but this year it has been brought forward for the congress. 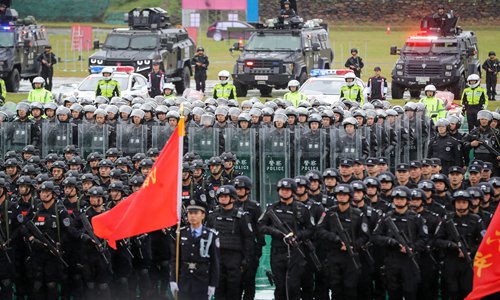