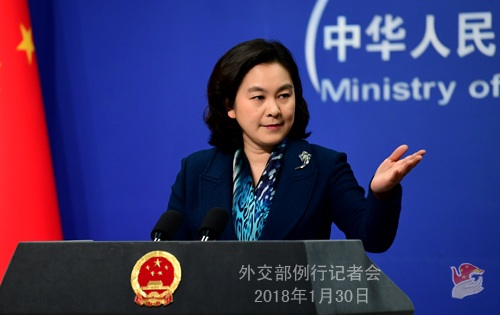 Foreign Ministry spokesperson Hua Chunying said during Monday's regular press conference that China firmly opposes and is severely cracking down on all forms of cyberattacks, in answering a question concerning the recently reported nation-wide 5G network to be built in the US, which is reportedly to counter threats from China.

Trump's national security officials are considering taking over a portion of the nation-wide 5G network to guard against China, Axios reported Sunday.

The gesture was deemed a government effort designed to thwart what the administration and some lawmakers say is potential Chinese espionage, US Today reported Monday.

"China's position on cyberattacks is consistent and clear. We firmly oppose and severely crack down on all forms of cyberattacks", said Hua. “The global attack of the WannaCry ransomeware not long ago made it clear that the weaponization of cyberspace and its proliferation pose a threat to the global cyberspace security and add to the risk of a cyberspace arms race,” added Hua.

Hua called on the international community to strengthen dialogue and cooperation to jointly address challenges and maintain peace and security in cyberspace on the basis of mutual respect and trust.

China has made breakthroughs on a batch of major projects in 2017, including 5G technology, said Miao Wei, the head of China's Ministry Industry and Information Technology (MITT), at a press conference in Beijing.

"China encourages domestic enterprises as well as foreign ones to participate in research and tests for the rapid development of 5G," said Zhang Feng, chief engineer of MITT.