HEADLINE China calls for direct dialogue between DPRK and US

China calls for direct dialogue between DPRK and US 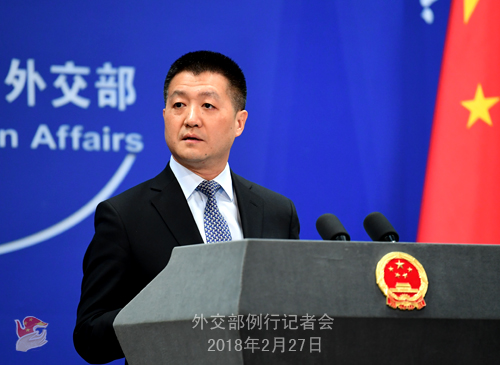 China said Tuesday that it hopes for direct dialogue between the Democratic People's Republic of Korea (DPRK) and the United States, and hopes such dialogue will commence soon.

Foreign Ministry spokesman Lu Kang made the comment responding to reports that US President Donald Trump said Monday that talks with the DPRK would be possible "only under the right conditions," after the DPRK side expressed its willingness to talk with the US.

Lu said that there is a relaxation of tension on the Korean Peninsula recently, and China hopes that the detente could be sustained after the Winter Olympic and Paralympic Games, which conforms to the common aspiration of the DPRK and the ROK, countries in the region and the international community, and will help push relevant parties back to the track of solving Peninsula nuclear issue via negotiations.

"The dialogue between the US and the DPRK is not only China's hope, but the common wish of the international community," Lu said. "We hope such dialogues can be held at an early date, and that the US and the DPRK will work together towards achieving beneficial results through effective dialogues."