China contributes $1 million to WFP to support families in Syria 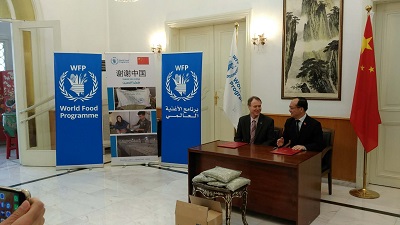 DAMASCUS (People’s Daily) - The government of the People’s Republic of China has contributed $1 million to the United Nations World Food Programme’s (WFP) operation in Syria, providing food assistance to nearly one million people impacted by the crisis there.

This contribution has been used to procure a total of 1,292.5 metric tons of green peas which arrived over the course of several shipments between December 2017 and  February 2018. The pulses will be combined with other staple food commodities to make food ration boxes for nearly one million people across Syria. WFP’s standard food ration box includes other staple food item such as rice, salt, sugar, wheat, flour and vegetable oil.

“WFP is grateful for this contribution from the government of China to help feed vulnerable families affected by the crisis in Syria,” said Jakob Kern, country director of WFP in Syria. “This donation will enable us to continue our vital support to families in need across the country.”