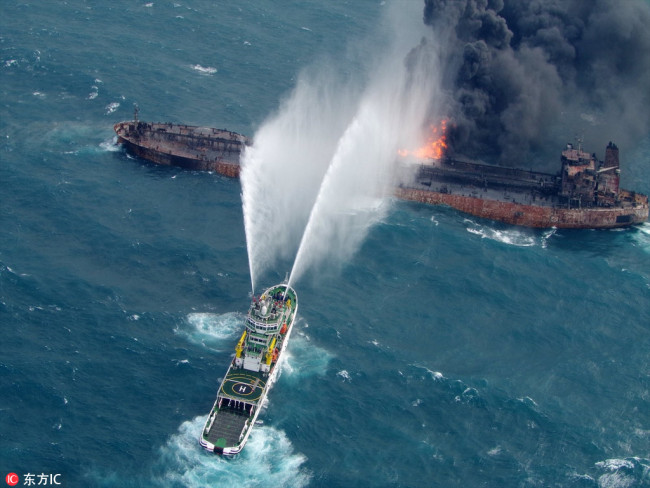 The fire on the Panama-registered tanker 'Sanchi' being doused after a collision with Hong Kong-registered freighter 'CF Crystal,' off China's eastern coast, January 10, 2018. [File Photo: IC]

As of Jan. 30, five Chinese vessels, as well as a Japanese vessel and one from the Republic of Korea, have cleaned a total of 225.8 square nautical miles, said Zhi Guanglu, an official with the Ministry of Transportation, at a press conference.

"We are also making plans to clean residual oil underwater with the help of underwater robots to root out the hidden risks from the oil spill," said Zhi, noting that the ship also carried some 1,900 tonnes of fuel oil.

China's marine, environmental and agricultural authorities have closely monitored the situation since the accident. Besides sending ships and planes, satellite remote sensing has been employed to monitor up to 800,000 square kilometers of sea surface.

As of Jan. 28, the detected area of oil slick zone had shrank to 30 square kilometers from 328 square kilometers on Jan. 21, according to Huo Chuanlin, an official with the State Oceanic Administration, citing official satellite remote sensing data.

Agricultural departments have also assessed nearly 500 samples from 40 locations. Fishing vessels are now allowed to enter areas with a radius of 30 nautical miles around the sinking site.

"Due to the latest monitoring results, the oil spill remains a stable and controllable influencing factor for fishing resources as of now," said Han Xu, an official with the Ministry of Agriculture.

The Panama-registered, Iranian-owned oil tanker Sanchi, carrying 113,000 tonnes of light crude oil, collided with the CF Crystal, a Hong Kong-registered bulk freighter, about 300 kilometers east of the Yangtze estuary on Jan. 6 and sank on Jan. 14.

The 32 crew members onboard the tanker -- 30 Iranians and two Bangladeshis -- were lost.