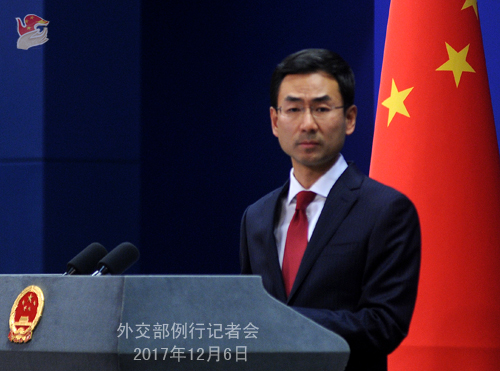 China said Wednesday that regional conflicts may intensify if US President Donald Trump decides to recognize Jerusalem as the Israeli capital.

The US president is expected to make the announcement later on Wednesday, multiple US media reported.

“We are concerned that it may escalate conflicts [in the Middle East region],” Chinese foreign ministry spokesperson Geng Shuang said Wednesday.

“All parties should focus on regional peace and stability, and avoid creating new confrontations, which may undermine the foundation of solving the Palestine issue.”

The Israelis seized East Jerusalem in the Six-Day War in 1967 and since then has considered the whole city as its capital.

China supports peaceful ways of solving the issue and backs the Palestinians’ right to establish a sovereign state.

“We hope all parties could stick to UN resolutions and solve the issue through negotiations,” Geng said.

Trump is also expected to approve the moving of the US Embassy in Israel from Tel Aviv to Jerusalem.