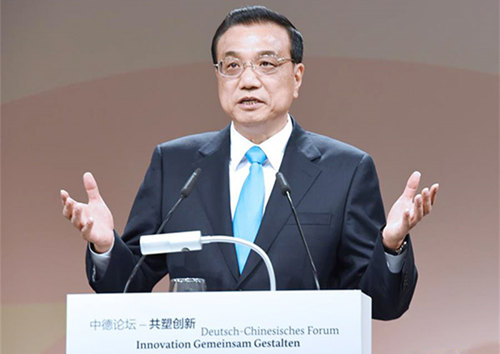 Cooperation on science and technology between the two countries has set an example for other big countries that are seeking similar collaboration, and has also powered bilateral relations with a strong engine, said Li in a congratulatory letter addressing the 5th Sino-German Innovation Conference held in Beijing.

Li said the new round of scientific and technological innovation is profoundly changing people's modes of production and living.

China, now at a crucial time for shifting the driving forces of its economy and upgrading its economic structure, will carry out an innovation-driven development strategy to build an innovation-oriented country, he said.

Li hopes China and Germany can pool their wisdom, increase consensus and enhance cooperation in science and technology innovation to promote the economic and social development of the two countries and inject new impetus into the global economy.

More than 300 representatives from both countries attended the conference.