HEADLINE China hits out at US provocation in South China Sea

China hits out at US provocation in South China Sea

China's Ministry of National Defense has said a US warship's entry into the waters around China's islands and reefs in the South China Sea is serious political and military provocation.

Ren Guoqiang, spokesperson of the ministry, made the remarks on Friday. 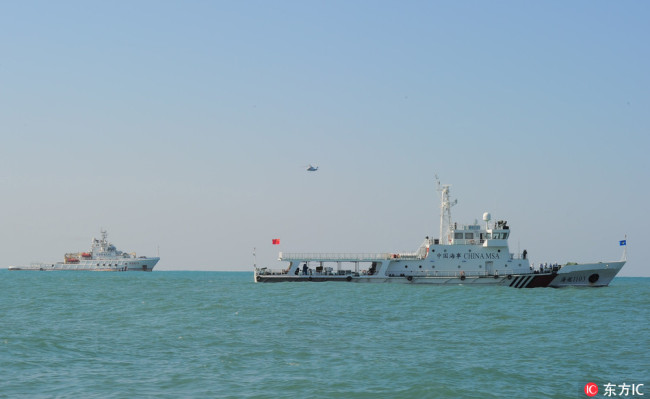 According to Ren, the USS Mustin, a guided missile destroyer, arbitrarily entered waters surrounding islands and reefs in the South China Sea, before two Chinese vessels identified it and warned it off.

China's sovereignty over the islands and their surrounding waters in the South China Sea is beyond question, he said.

However, the US has time and again sent warships into the area, which severely damaged the sovereignty and security of China and went against the basic norms of international relations, Ren continued.

China resolutely opposes such actions, as they harm military relations between the two countries, causing close encounters between the countries' air forces and navies, which could lead to misjudgment and even accidents, according to the spokesperson.

"We ask the US to respect the sovereignty and security of China, respect the will of countries in the region, who want peace, stability and tranquility, and not to trouble out of nothing," he said.

Ren further noted that the provocation would only drive the Chinese military to continue to improve its defense capabilities.

On Jan. 17, two months before the incident on Friday, the USS Hopper, another guided missile destroyer, made an arbitrary entry into the waters surrounding Huangyan Island in the South China Sea, and was driven away by Chinese missile destroyer Huangshan.