HEADLINE China hopes for progress by DPRK, US in dialogue

China hopes for progress by DPRK, US in dialogue 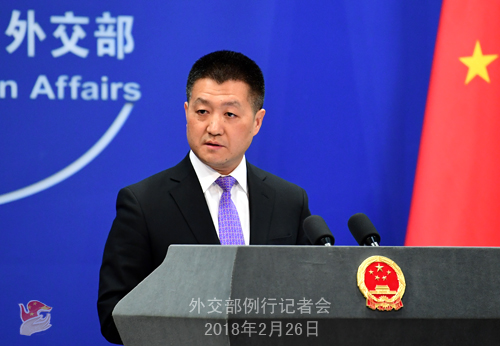 China hopes the Democratic People's Republic of Korea (DPRK) and the United States can make progress in dialogue to promote settlement of the Korean Peninsula nuclear issue, a Foreign Ministry spokesman said Monday.

A high-ranking DPRK delegation showed readiness to talk with the United States when meeting with Republic of Korea (ROK) President Moon Jae-in Sunday in PyeongChang, saying Pyongyang was willing to hold talks with Washington, and held that inter-Korean relations and DPRK-US ties should progress together.

Regarding the reports, Foreign Ministry spokesman Lu Kang said at a daily news briefing that China welcomes the progress the DPRK and ROK have made in carrying out dialogue and improving relations.

"The core of the Korean Peninsula nuclear issue is a security issue," Lu said, adding settlement of the core issue relies on the DPRK and the United States.

When asked for comment on the news that the DPRK and ROK may discuss resuming regular reunions of families separated by the 1950-53 Korean War, Lu said, "For both countries in the region and the international community, it will be one thing that makes them pleased if the DPRK and ROK hold family reunions once again."

"It is encouraging that the two sides have released a series of positive signals recently in improving their relationship," Lu said.

China hopes the two sides will seize the opportunity, continue to show goodwill toward each other, and maintain the momentum of cooperation and dialogue, Lu said, adding both sides should make concrete efforts to further improve their relationship, ease regional situation and maintain peace and stability on the Korean Peninsula.