HEADLINE China launches anti-dumping case on phenol against the US, EU, S.Korea, Japan and Thailand

China launches anti-dumping case on phenol against the US, EU, S.Korea, Japan and Thailand 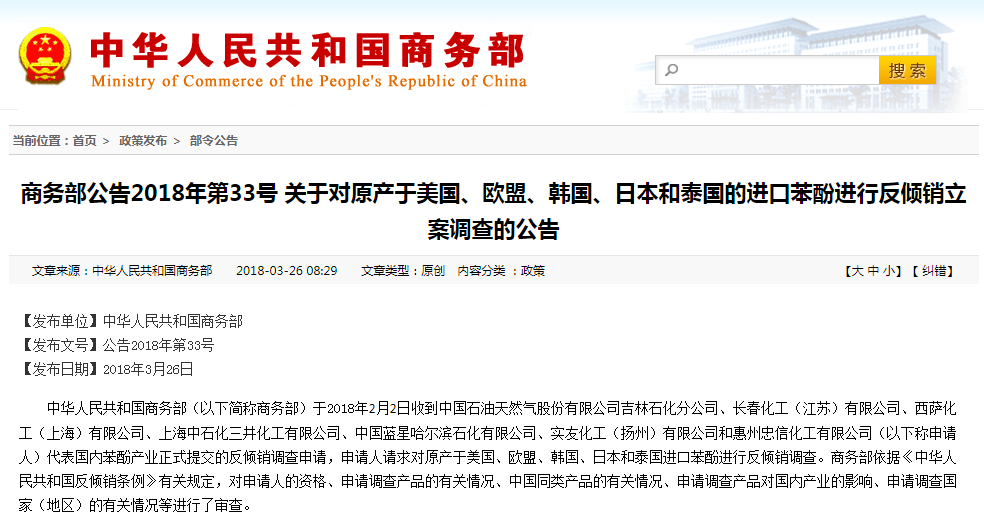 Beijing (People's Daily) - China on Monday filed an anti-dumping investigation into imported phenol from the US, the European Union (EU), Japan South Korea and Thailand, the Ministry of Commerce (MOFCOM) announced on its website.

The ministry received a joint application demanding an inquiry from seven domestic producers, who accused foreign manufacturers of dumping products on the Chinese market, according to an official statement.

The combined phenol output of seven applicants accounted for more than of the country’s total during the 2014-2017 period.

The ministry will investigate whether foreign companies from the five countries and regions have sold their products in China at an artificially low price.

The investigation should be concluded by March 26, 2019, and in special circumstances, may be extended to September 26 of next year, according to the statement.

Phenol and its chemical derivatives are essential for production of polycarbonates, epoxies, Bakelite, nylon, detergents, herbicides, such as phenoxy herbicides; and numerous pharmaceutical drugs.

The worldwide phenol market is estimated to be valued at $31.73 billion by 2025. Asia Pacific holds the highest market share. The Asia Pacific market is anticipated to project a CAGR of 4.9 percent from 2014 to 2025.