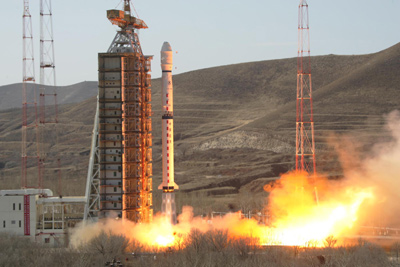 A Long March-4C rocket carried the satellite into space. The satellite has entered its orbit.

Fengyun-3D is one of China's second generation of Polar-Orbiting Meteorological Satellites, which can provide global three dimensional all-weather and multi-spectral remote sensing images.

The satellite will form a network with the Fengyun-3C satellite, which was launched into space in September 2013, to improve the accuracy of atmospheric sounding and enhance the monitoring of greenhouse gases. The network will help China's disaster relief work.

The Fengyun-3D satellite and the Long March-4C rocket were developed by Shanghai Academy of Spaceflight Technology under China Aerospace Science and Technology Corporation.

The launch was the 254th mission of the Long March rocket series. Enditem