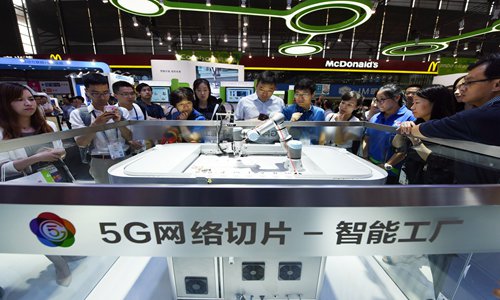 Visitors are seen at an intelligent factory based on 5G technology during the Mobile World Congress held in Shanghai from June 28 to July 1, 2017. Photo: VCG

China is leading in the development and commercialization of  fifth-generation (5G) mobile networks, as domestic telecommunication companies backed by the government pursue the technology that could determine the future of mobile communications and beyond, Chinese experts said on Tuesday.

Telecom heavyweights Huawei Technologies Co and ZTE Corp have been intensifying their efforts in testing and establishing the technological infrastructure for 5G services in China and abroad, taking an apparent dominant position, albeit with challenges from companies in countries such as South Korea and the US, experts added.

"While there is no clear evidence suggesting that China is leading the 5G race, there are a few areas where Chinese companies have an advantage over their foreign counterparts," Fu Liang, a Beijing-based independent telecom industry analyst, told the Global Times on Tuesday.

One area is the number of tests and other preparation efforts Huawei and ZTE have made, according to Fu, who added that Chinese companies "have shown their capability as well as their determination to commercialize 5G by 2020."

Huawei and ZTE have been conducting tests in China and other countries such as Italy, Spain and Germany and are laying the foundations for the final adoption of 5G technology, which is said to be much faster and more reliable than the current 4G network.

In preparation for the 5G era, ZTE released on Tuesday a new-generation cloud operating system TECS 6.0, which the company said is key to the use of 5G networks, according to a company statement sent to the Global Times on Tuesday.

"For [telecom firms] to pave the way for network evolution and address future challenges, it is the key to building an OpenStack-based platform and cloud infrastructure featuring intelligence, convergence and high speed," the statement said, adding the new cloud network meets all the three required features.

The statement also noted that ZTE has deployed its OpenStack-based cloud operating system TECS in many private and public cloud networks around the world and has launched more than 280 commercial/POC (proof of concept) projects of cloud infrastructure around the world.

ZTE is also working with several of world's largest telecom services providers such as Spain's Telefonica, which has a presence in Europe and Latin America, and Germany's Deutsche Telekom in 5G technology development, it said.

In a separate statement on Thursday, ZTE said that it had successfully completed its first-phase 5G transport test in cooperation with Telefonica at its Future Networks Lab in Madrid, Spain.

Huawei has also been cooperating with global telecom companies such as Etisalat based in the United Arab Emirates and UK's Vodafone on 5G technology development, according to a chart on the company's website.

Li added that Huawei and ZTE could become dominant players in the 5G industry chain, which is expected to offer lucrative opportunities, given the wide-scale application of 5G in areas from telecommunication to autonomous driving.

It was the huge support from the Chinese government, which is determined to take the lead in 5G, and a massive domestic market that encouraged the two Chinese companies to make such bold moves, the experts said.

The Chinese government has announced many policies to support the research and development of advanced technology such as 5G services. A report released on October 18 by UK mobile industry research firm CCS Insight said that China will take an early lead in 5G with users of such services expected to account for more than half of the global total by 2022.

However, in terms of technology, Chinese companies have no clear advantage over foreign competitors such as South Korea's Samsung Electronics Co and US-based Qualcomm, the experts added.

"We have the determination and resources to bring 5G into reality, but it's not an easy race. We will definitely see some fierce competition," Li said.