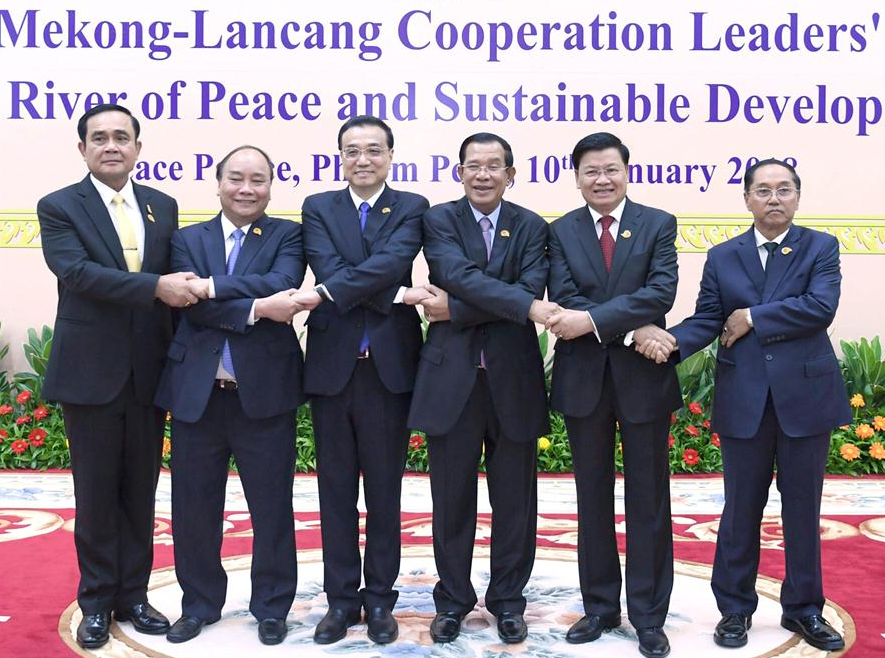 Chinese Premier Li Keqiang on Wednesday called on five nations living on the Lancang-Mekong River to consolidate political will and deepen economic ties to promote regional peace and sustainable development.

China is willing to work with others to strengthen the Lancang-Mekong Cooperation (LMC) as China benefits from regional stability and its neighbors are beneficiaries of China's economic vitality, Li said at the second LMC leaders' meeting held in the Cambodian capital of Phnom Penh.

With a theme of "Our River of Peace and Sustainable Development", the meeting brings leaders of China, Myanmar, Laos, Thailand, Cambodia and Vietnam to the table, discussing issues such as connectivity, water management and industrial production capacity.

The LMC mechanism has produced better-than-expected progress over the past two years as the countries moved forward with the principle of equality, inclusiveness and put development as a priority.

With progress and results delivered daily, monthly and annually, a truly remarkable LMC speed has been created, and a defining LMC culture featuring equality, sincerity, mutual assistance and kinship has been established, Li said.

The Chinese premier made five proposals to secure shared future for the LMC countries as he said he believed they will become the biggest and earliest beneficiaries of China's development.

He called for stronger coordination among countries along the Lancang-Mekong River on water resource management, accommodating each other's concern, and properly handling the relations between economic development and environmental protection.

In his speech, Li also urged to map out a five-year action plan for water resource cooperation, enhance emergency management on droughts and floods, carry out joint research on water resource and climate change, and improve water quality monitoring system.

Regarding capacity cooperation in water conservancy infrastructure and other areas, Li said China encourages companies to participate in the construction of hydropower stations, reservoir, irrigation and drinking-water projects in Lancang-Mekong countries.

To expand agricultural cooperation, Li said China backs its companies to tie up with their partners in Lancang-Mekong countries on the deep processing of agricultural products and the joint development of the third markets.

China is willing to deepen cooperation with Lancang-Mekong countries in agricultural technology and build platforms for technology exchange, joint research as well as investment and trade cooperation, said the premier.

Meanwhile, Li called for upgrading human resource cooperation. China will offer short-term training and in-service education for 2,000 people in Lancang-Mekong countries and 100 four-year scholarships for undergraduates in 2018, he said.

In the declaration, the leaders stressed the vision and importance of the LMC in contributing to the socio-economic development of sub-regional countries and enhancing the well-being of their peoples, narrowing the development gap among countries, supporting the ASEAN Community building as well as advancing South-South cooperation and enhancing the implementation of the United Nations 2030 Agenda for Sustainable Development.

The meeting, co-chaired by Cambodian Prime Minister Samdech Techo Hun Sen and the Chinese premier, also released the second batch of cooperative projects and reports of the six Joint Working Groups on the key priority areas.

The first LMC leaders' meeting was held in Sanya of China's Hainan Province in March 2016, when the goal of building a community of shared future of peace and prosperity for the LMC countries was endorsed.

The Lancang River originates on the Qinghai-Tibet Plateau in southwest China. It is called the Mekong River as it flows through Myanmar, Laos, Thailand, Cambodia and Vietnam before emptying into the sea.