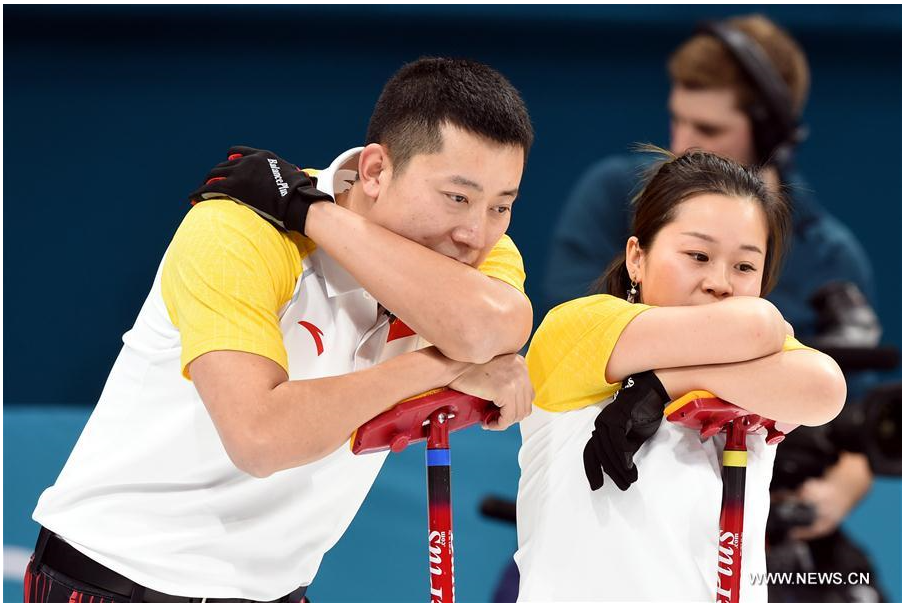 Wang Rui/Ba Dexin, the bronze medalists at this year's world championships, bounced back from an opening 7-5 loss to reigning world champions Jenny Perret and Martin Rios of Switzerland Thursday morning to take the lucky win.

"I think Wang and Ba did a good job. They made quick adjustment after losing the first match in the morning," said China coach Zhang Zhipeng. "It's the first Olympic Games for Wang and both of our players are pretty young. This victory is a confidence boost for them."

China started with a 2-0 lead in the first frame and improved to 6-1 after four ends. Jang Hye-ji and Lee Ki-jeong pulled within 6-5 after cashing in four points in the fifth and went on to tie it at 7-7 in the seventh.

"We made little mistakes in the fifth end and gave them chance to come back. We could have had better control," Zhang added.

Wang missed a chance to seal the victory for China in her last shot in the eighth end before Jang Hye-ji threw the last stone far in the extra game to allow China clinch the match winner.

"It's great to win! This is curling! You never know what's going to happen in the next second," said Ba. "We made some mistakes, but we never give up. I think that's why we were able to take the victory."

Switzerland edged Finland 7-6 for their second straight win in the round-robin preliminaries while Olympic athletes from Russia beat Norway 4-3 and the United States lost to Canada 6-4.

Eight teams are competing in the newly introduced Olympic event with the top four finishers in the preliminaries qualifying for the semi-finals.