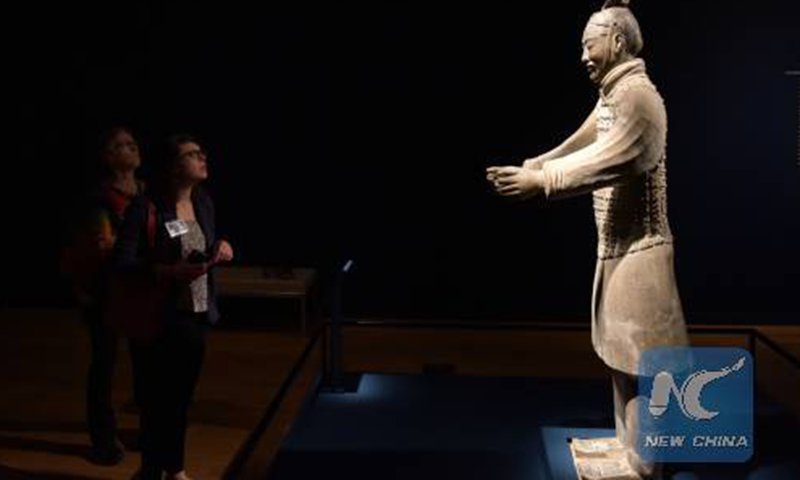 The Chinese custodians of a 2,200-year-old statue of the world-renowned terracotta warriors on loan to a US museum are calling for the man accused of stealing the statue’s thumb to be punished by the full extent of the law. The Shaanxi Cultural Heritage Promotion Center has also offered to send two experts to the Franklin Institute in Philadelphia to help repair the statue, the Beijing Youth Daily newspaper reported on Monday, which didn’t mention if the offer had been accepted.Michael Rohana, 24, was arrested and released on a $15,000 bail. A special agent from the FBI's Art Crime Team tracked down Rohana at his home in Bear, Delaware, the Xinhua News Agency reported.Museum staff discovered the statue of the ancient Chinese cavalryman was missing a thumb on January 8. Authorities alleged Rohana snuck into the exhibit room after closing hours, while attending another function at the museum last December. He deliberately snapped off the statue’s thumb and stuffed it in his pocket. When the FBI questioned him, he admitted stealing the artifact and retrieved if from his room. A US attorney has decided to charge Rohana with theft of a major artwork from a museum, concealment of major artwork stolen from a museum, and interstate transportation of stolen property.The center in Shaanxi was outraged after learning of the vandalism and condemned the museum for not releasing the information in a timelier manner, an unnamed official at the center told the Beijing Youth Daily. The Franklin Institute makes no mention of the theft on its website. A spokeswoman for the museum said a security contractor did not follow standard procedures the night of the theft.The unnamed official from Shaanxi told Beijing Youth Daily that the center has initiated a compensation claim and has contacted other foreign museums with similar exhibits to ensure proper security measures are in place. The Shaanxi center has received photos and video of the damaged statue that will help experts repair the damaged statue.The terracotta warriors on display in Philadelphia are among hundreds of similar statues discovered in the 1970s near the city of Xi’an that were buried not far from the tomb of China’s first emperor Qin Shihuang who ruled around 200 BC.