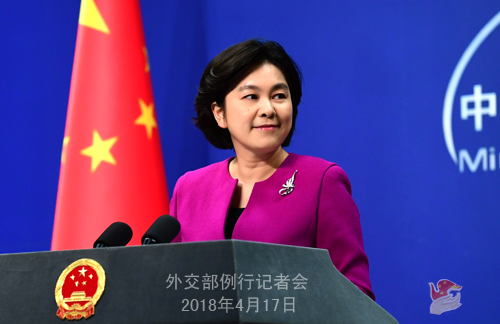 China renewed its rebuke of US punitive trade measures on Chinese imports on Tuesday, calling them an act of unilateralism and economic hegemony.

“As the biggest economies in the world, China and the US are deeply intertwined and should respect each other in an equal manner and seek the win-win cooperation,” said Chinese Foreign Ministry spokesperson Hua Chunying at a regular briefing.

“As to the current trade tensions triggered by the Section 301 investigation, China’s stance is clear and has repeated it many times that the US is playing a typical unilateralism action and economic hegemony,” said Hua.

US trade protectionism has spurred intense criticism at home and in the international community, Hua added.

Last week, 107 US business groups sent a letter to Congress calling on lawmakers to ensure that US consumers won’t be harmed by the planned tariffs on Chinese imports.

In the letter, the associations representing retailers, farmers, manufacturers and technology groups expressed their concern that if President Trump decides to impose billions in tariffs on China, it will result in higher prices for American consumers and less jobs for American workers.

Hua warned that if the Trump administration continues the absurdity and moves against the trend of the times, China will take it seriously and respond with necessary action. “This is not only for the legitimate rights of China, but also in support of the rules of international multilateral trade.”