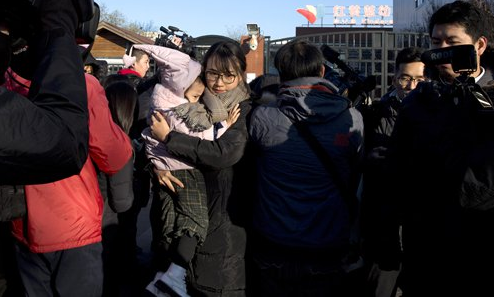 A woman leaves with a child after telling the media she came to withdraw the child from the RYB Kindergarten in Beijing on Friday. Chinese authorities are investigating allegations that children attending the school have been abused. Photo: IC

The State Council called for nationwide inspections of kindergartens Friday following allegations of child abuse at a Beijing private kindergarten that sparked public outrage Thursday.
Kindergartens in several cities have reportedly been engaged in child abuse. Such incidents show that some kindergartens have failed to implement measures and were poorly managed, according to a notice issued by the education committee of the State Council Friday.
Beijing has launched a citywide inspection of kindergartens, and local education commission is also requiring kindergartens in all districts to improve safety, professional ethics and teaching quality, the Beijing Municipal Education Commission said on its Weibo Friday.
The authority's move comes after preschool children at the RYB Education New World kindergarten in Chaoyang district were allegedly sexually molested, pierced by needles and given unspecified drugs.
A senior People's Liberation Army (PLA) official on Friday denied that the kindergarten has any links with the Chinese military.
The kindergarten was not operated by the army or relatives of soldiers, and soldiers were not involved in the alleged molestation of children, Feng Junfeng, political commissar of a regiment of the PLA Army, told the PLA Daily Friday.
Feng said the kindergarten's head was a relative of a veteran of the regiment.
Audio and video recordings, in which children claimed they were forced to take pills to sleep and given physical examinations by some "uncle and grandpa doctors," with one allegedly being naked, went viral Thursday, sparking public outrage.
Some netizens claimed that the kindergarten was allegedly run by Feng's regiment, and even soldiers from the regiment had allegedly molested children.
RYB Education responded Friday, saying that the company has provided documents and surveillance footage to police, and that the teachers allegedly involved have been suspended.
The company also told police it has been falsely accused and framed by some people. The company added it would apply a zero tolerance policy on those who violate professional ethics.
Founded in 1998, RYB Education is based in Beijing and listed on the New York Stock Exchange. It has more than 1,300 daycare centers and nearly 500 kindergartens in 300 cities in China, according to its website.
RYB Education's shares fell by 47.21 percent to $14.10 in pre-opening trading Friday after dropping 3.68 percent to $26.71 at the close of trading on Wednesday.
The media has reported alleged child abuse cases at other kindergartens as well. A teacher at a kindergarten in Zhenjiang, East China's Jiangsu Province reportedly punched the heads and pulled the ears of children. The local education bureau said Thursday the teacher who allegedly committed the acts has been suspended, the Nanjing-based newspaper Modern Express reported.