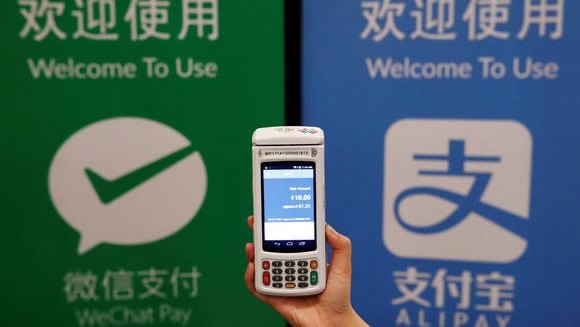 More than 20 of China's third-party payment services, handling the lion's share of 8.8 trillion US dollars' worth of yearly transactions, have begun plugging their data into a mandated central clearing house.

The milestone comes ahead of a Sunday deadline requiring all banks and online payment systems to connect to the platform, as the nation's central bank pushes for a finger on the pulse of the world's leading digital payment sector.

Digital payment first spawned as a necessary byproduct of e-commerce, but in recent years has mushroomed at an astonishing pace. Transaction volumes in 2016 quadrupled from the previous year to reach a colossal 58.8 trillion yuan, according to figures from Beijing-based consultancy research.

Its size is expected to continue setting records, growing at over 30% in the next two years, forecasts the research firm.

Online payment has been an area that has been gone under the radar, and when users pay with their phones or on their desktops, bank information shows the third party provider as the recipient, leaving many vital details of the transaction murky.

This has allowed such payment activity to skirt the scrutiny of regulators, and as third party payments increasingly permeate everything from payment of utility bills, purchases of valuable merchandise to bank transfers, they have become a segment of finance too large to be left unexamined.

“Vast amounts of banking information have been rendered opaque to the central bank, denying the institution a full analysis of the nation’s financial data,” says Cai Kailong, co-founder of fintech industry association IFC1000. “This impedes the making of reasonable decisions for financial regulations and monetary policy, and is a road block for anti-money laundering campaigns,” he says.

Authorities have required that all third-party payment transactions will be channeled through the new clearing platform starting June 30 next year.

Alipay and Tenpay, the two payment behemoths which account for a combined 95 percent of China's online payment market, connected with the clearing house this spring in trail run, less than a year after the blueprint for the platform was approved by the central bank in August 2016.

These two main players became guinea pigs for the platform, not merely out of duty, but also out of a vested interest. Both Alipay, affiliated with e-commerce giant Alibaba, and Tenpay, owned by Tencent are stakeholders in the new platform, each holding a 10% investment.

The two follow behind the central bank, with over 30% stake, as the largest investors behind the clearing house.

Apart from an added layer of safety, the average consumer will hardly be able to tell the difference in the form in increased transaction charges as the central clearing house does not seek a profit through additional fees, says Cai.