China reiterated its opposition to the attack on Syria by forces from the US, Britain and France. 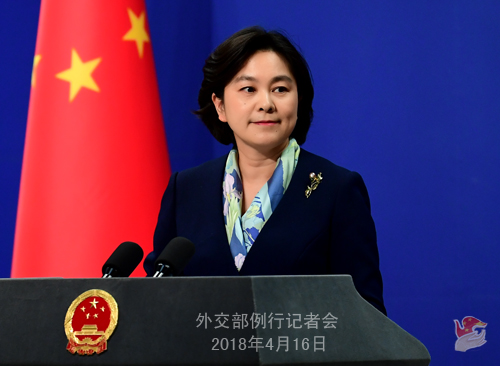 Foreign Ministry spokeswoman Hua Chunying told a daily briefing on Monday there are clear rules on the use of force under the UN Charter. The US, UK, and France launched a military strike against Syria and violated the basic principles of international law prohibiting the use of force, which is contrary to the UN Charter.

She said using chemical weapons as an excuse to engage in a military response against other countries turned out bad, like the Iraq case.

She stressed that China’s stance on the issue is very clear. “We oppose the use of chemical weapons by any country, organization or individual under any circumstance for any purpose. We advocate a comprehensive, objective and impartial investigation into the suspicious and suspected militarization incidents, and draw a robust conclusion. China supports field investigations in Syria. Before reaching conclusion, all parties cannot predict or assume the results,” Hua said.

She reiterated that there is no way out for a military solution to the Syrian issue. A political settlement is the only realistic choice. Frequent use of force complicates the problem and makes it difficult to resolve. The relevant parties should earnestly learn lessons and avoid repeating the mistakes.