The efforts of China to exert covert influence on the West are just as concerning as Russian subversion, said Mike Pompeo, the director of the Central Intelligence Agency in an interview with BBC aired on January 29.

Pompeo said that the Chinese "have a much bigger footprint" to conduct such covert activities than the Russians do. After the release of the interview, it became a hot topic on Quora, a popular Q&A platform for people to share and grow the world's knowledge.

With its fast development during the past decades, China is now the second largest economy in the world. And facing this kind of growth, it is normal that the US, the No.1 economy, has to deal with competition with China.

However, the answer provided by Gabriel Chan also added, “But China really is seeking coexistence rather than competition. These two countries have a lot more in common than one may think and lots of reasons to cooperate rather than kill each other. Humanity benefits more in a US-China alliance. ” 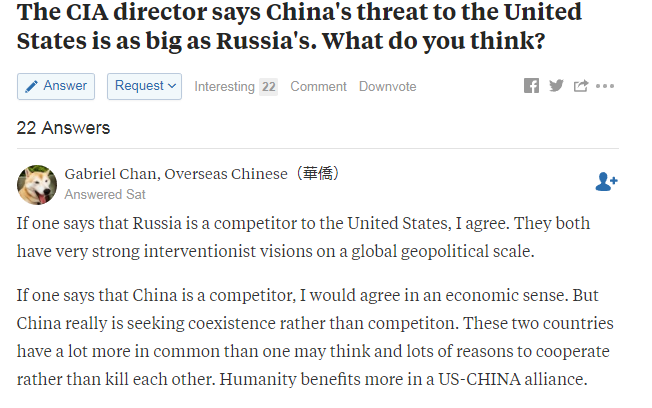 A screenshot of Quora

On February 1, China’s Foreign Ministry Spokesperson Hua Chunying said at a press conference for Pompeo’s words in the BBC interview, “Let's not forget that facts speak louder than words. Because if we have a review of all kinds of disclosed information, it is easy to see who is doing the massive spying, monitoring, espionage and infiltration thing and who is doing whatever is necessary without holding anything back to maintain and exert its influence.”

Pompeo has held a hardline stance on China. In July of last year, he said the largest threat to US domination in the world was from China, instead of Russia or Iran, in an interview with the Washington Free Beacon.