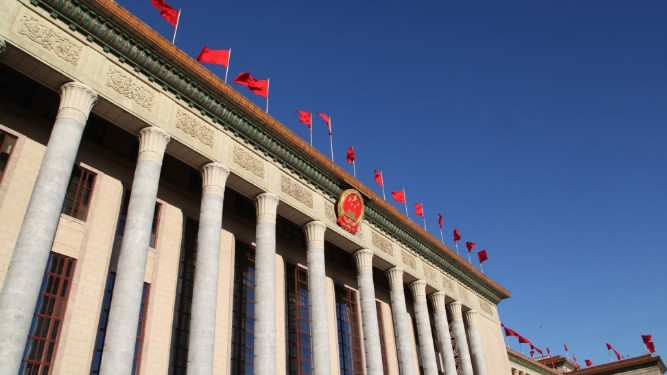 China's top legislature adopted on Saturday a revised oath of allegiance to the Constitution taken by state functionaries, which adds adjectives of "great," "modern" and "beautiful" to describe "a socialist country."

The oath reads: "I pledge allegiance to the Constitution of the People's Republic of China, to safeguard the Constitution authority, perform obligations given by the laws, be loyal to the country and people, be committed and honest when performing duties, accept the people's supervision and work for a great modern socialist country that is prosperous, strong, democratic, culturally advanced, harmonious, and beautiful."

The revision to the legislative decision on allegiance to the Constitution was adopted at a session of the Standing Committee of the National People's Congress (NPC), which closed Saturday.

While most parts of the oath remain unchanged, the last phrase is changed into "to work for a great modern socialist country that is prosperous, strong, democratic, culturally advanced, harmonious, and beautiful," according to the document.

All oath takers are required to sing the national anthem.

Senior NPC deputies have said pledging allegiance to the Constitution is important to the advancement of the rule of law and to raising the public's awareness of the Constitution.

The Constitution was adopted on Dec. 4, 1982. It is expected to be amended for the fifth time in March when the 13th NPC convenes its first session.