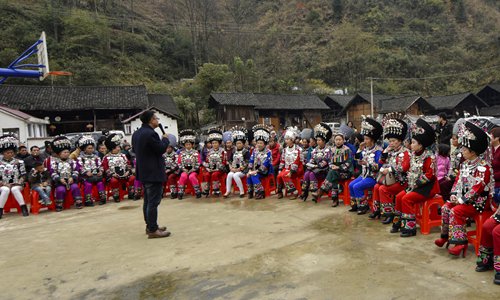 One day in November, dozens of dusty farmers, some still carrying their tools, sat down on the dirt ground at their vegetable farm in Changshun county, Qiannan Buyi and Miao Autonomous Prefecture in Southwest China's Guizhou Province. They had been told to attend a study session.On a large red banner above them, strung up between two trees, hung the words "Farmer Training Institute of the New Era."Standing in front of them was Lei Yu, a middle-aged lecturer from the local Party school. "So when was the 19th National Congress of the Communist Party of China (CPC) held? What did it say about land issues which we farmers care most about?" he yelled into a portable microphone.As one elderly farmer shook his head and questioned Lei about the purpose of his lecture ("We farmers don't understand all this stuff!"), Lei said patiently, "Doesn't [the government] pay you when they borrow your land to grow vegetables? Aren't you paid working here in the vegetable farm? These are all benefits from the government's policies. And we should learn more about them!"While such dialogue may at first seem painstakingly old-fashioned, study sessions, held out in the field or inside village committee buildings, have been taking place across thousands of Chinese villages in just the past few months in provinces including Guizhou, Hubei, Qinghai and Zhejiang.The study sessions have become a new channel employed by grass-roots CPC committees to publicize the Party's political thoughts and rural policies and to impart to farmers practical ways to alleviate them out of poverty.In Guizhou's city of Bijie alone, 3,896 farmer training institutes have been established in each of its counties, townships and villages since April. To date, over 18,000 study sessions have been held. In the remote Datong Hui and Tu Autonomous County in Qinghai Province, 70 new institutes have been launched. 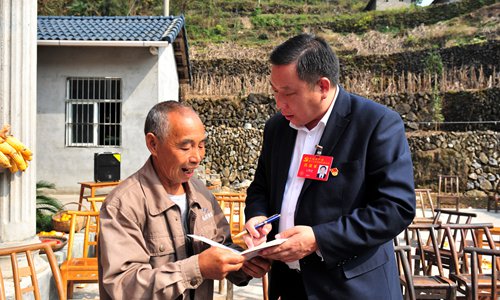 A Party representative speaks with an elderly farmer during a study session in Hubei Province. Photo: VCG

Back to the good old daysThe Chinese name for these training institutes, Jiangxisuo (literally "teach and study centers"), is reminiscent of the Peasant Movement Training Institutes run by early Chinese Communists, including Mao Zedong himself, from 1924 to 1927.Back then, they helped train revolutionary peasant cadres to lead peasant movements, which were in full swing at that time. Mao personally lectured on subjects including "The Problem of the Chinese Peasantry" and "Rural Education," and was the principal of the Peasant Movement Training Institute in Wuchang, Hubei Province, in 1927.It was during that period when Mao declared that peasants would become the primary force in their revolution.Ninety years later, however, the CPC has been criticized for "losing its grip" on farmers, who are now considered one of China's most underprivileged social classes. As more and more young rural residents leave their countryside villages to work as migrant laborers in bigger cities, Party building in many Chinese villages has become slack and disorganized.In a previous interview with the Global Times, Zhang Xixian, a professor from the Party School of the CPC Central Committee, said such dramatic changes in China's social landscape are posing major challenges to the Party, which once portrayed itself as a "worker-peasant movement."Farmer training institutes are the Party's latest attempt to tackle this growing problem in an attempt to bring the relationship between the Party and farmers "back to the good old days.""Don't hide when you see Party cadres, just like villagers never hid when they saw the Red Army. The Party helps us get rid of our root of poverty, and our days will become flourishing!" Zhou Jiankun, Party secretary of Bijie, one of the first cities to have launched the new training institutes, recited during a panel discussion attended by delegates from Guizhou at the 19th CPC National Congress in October to promote the institutes.Zhou's briefing was given a supportive nod by Xi Jinping, general secretary of the CPC Central Committee, who participated in the same discussion. "In this new era, farmer training institutes carry a new meaning. This is innovation," Xi said during the discussion, according to Xinhua. 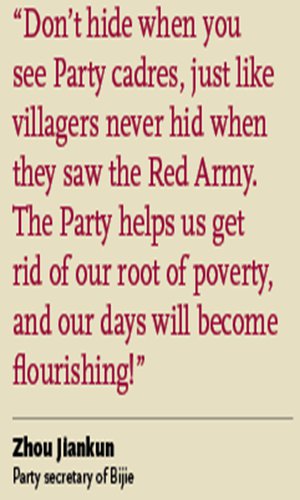 Face-to-face communicationYu Shirong, a 42-year-old farmer in Xinjie village, Guizhou's Meitan county, has been participating in her village's farmer training institute for several months. She said such sessions give her more confidence about the future of her village."My grandma says this reminds her of the old days, when villagers would convene. She said she hasn't seen such a scene for decades. This shows our village is becoming more closely-knit and cohesive," Yu told the Global Times."Although we sometimes read the newspaper and posts about government policies on WeChat, we are often either misled or fail to understand their true meanings. The village's Party cadres can teach us policies using a language that we can understand," she added.Each lecture, Yu says, attracts between 60 to 100 farmers, who are notified about the sessions through their group leaders or via loudspeakers. Most sessions are held at night or during rest breaks in the day.Some participants, Yu said, once worked as migrant laborers in the city, but recently returned to their hometown, attracted by new local opportunities that have begun to spring up as a result of the central government's renewed focus on China's interior regions.Zheng Xinggang, Party secretary of Xinjie village, said the lectures are an important channel for face-to-face communication between Party cadres and farmers.As Party secretary, Zheng lectures on Party thought. Capable professionals in the village are also invited to speak about agricultural technology, while officials from neighborhood committees lecture about government policies."Nowadays, farmers obtain information mainly through the internet. The training institute is the only platform that does not rely on the internet to help them learn about Party policies and also make their voices heard by the Party," Zheng explained to the Global Times.Guest lecturersAs one of the villages that have been circulating the use of land rights, a land reform policy now promoted by the CPC, farmers in Xinjie can transfer their land operation rights to the village committee so that dispersed farmland can be centralized for intensive mass agricultural production.In return, farmers receive stakes in the village cooperative. Yu leased previously barren land to the village committee and works at the village farm earning 120 yuan ($18) per day. "During our study sessions, villagers also talk about land policies and how to better run the village cooperative farm," she said.Some villages have employed successful farmer entrepreneurs to teach villagers how to start their own business. These entrepreneurs include Li Shunjiang, a former migrant worker who is now the boss of a chicken farm in Guizhou's Tiankan village, where he raises over 500,000 chickens each year, according to Xinhua.Li joined the CPC in October and vowed to help his fellow villagers get out of poverty by training them on poultry rearing and offering them stakes in his cooperative. Since last year, he has trained and employed over 300 people living beneath the poverty line.In Wafang village in Guizhou's Qianxi county, a Farmer Training Institute of the New Era was held right outside a piggery, where Peng Dexiang, the most successful pig farmer in the village, lectures his fellow villagers about pig farming skills, China National Radio reported.Peng's lectures, which include how to mate pigs, how to optimize the humidity and temperature of a piggery and how to feed pigs a healthy diet to make their meat fresher, inspired Wang Desheng, a fellow villager, to market his pigs as "ecologically-friendly," which  helped him earn over 200,000 yuan last year. Newspaper headline: Peasants of the new era